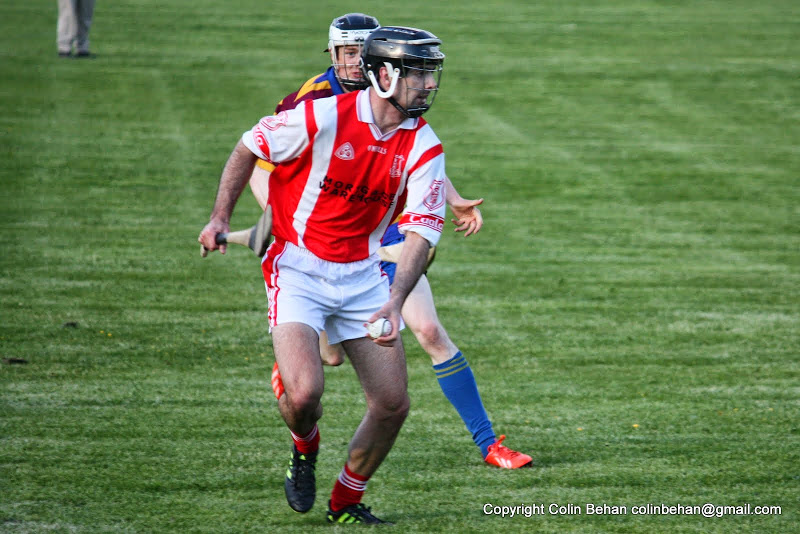 Cuala traveled to Longmeadows Islandbridge to play St. Brendans in a must win league match. St. Brendan’s hurling club was formed over 50 years ago to cater for the psychiatric nurses of Grangegorman that wanted to hurl while working in Dublin. They moved to Islandbridge  (Clann Coláiste Mhuire’s old pitch) while Grangegorman is being redeveloped for a new university campus.

A lovely sunny Sunday morning in Islandbridge, Cuala were coming off the back of a 1/4 final championship victory last Wednesday and now had to knuckle down to the bread and butter stuff of  league hurling. It was Brendans that got off to the best start scoring 3 points without reply in the first 7 minutes. That appeared to be the wake up call Cuala needed and before long David Ryan followed a long dropping ball from Sean Dowling in around the square and when the keeper tried to side step him he dropped the ball and David pulled on it and it ended up in the back of the net. A pointed free from Cillian Sheanon followed shortly after Cuala were in front and never relinquished it. A long clearance from Colm Murphy found the outstretched hand of his namesake Andrew who hand passed to the oncoming Cillian Sheanon who rounded the corner back and drove the ball low and hard past the oncoming keeper and into the back off the net. St. Brendan’s did not lie down. They harried and ran at the Cuala half back line which was majestically marshaled by  Colm Murphy and The Bull Hayes (Conor). Occasionally when Brendans did penetrate this line they then had to get past the Cuala full back line of Andy Browne, Colmán Ó Drisceoil and Neil Kelly who were absolutely immense. Throughout the 60 minutes of the game Buttsy had only one shot to save such was the dominance of the Cuala defense. At full forward Andrew Murphy was more than a handful for the Brendan’s full back and with 5 minutes to go to half time Andy beat his man again and crossed selflessly to Seán Gibney who struck the ball on the run so it bounced in front of the keeper and into the back of the net. At half time Cuala led 3-5 to 0-5.

Against a strong breeze in the second half  the Cuala full back line were again put under pressure but persevered and withstood the Brendans onslaught. Cian Byrne and Sean Dowling were continuously running at the Brendans defence laying off ball for Jack Behan and Mattie Higgins to take on their men and run for the Brendans goal. Jack took over the free taking role from Cillian Sheanon and slotted over 3 long range frees and kept the score board ticking over. Andy Murphy did score a goal in the second half but the referee deemed that he had fouled the ball.