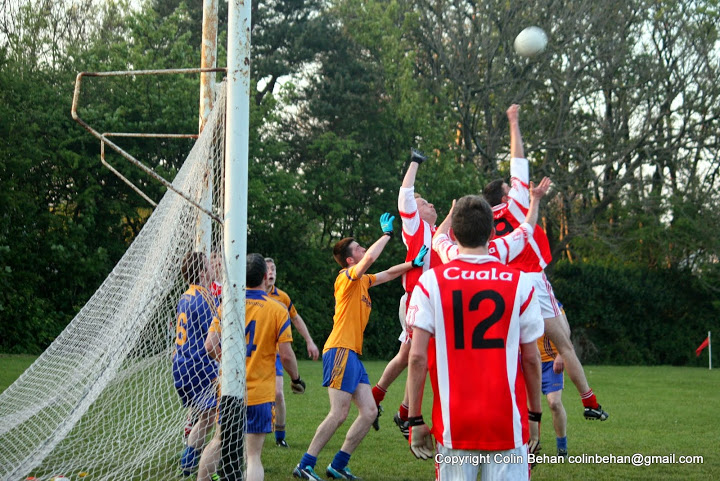 The adult 3rd team reached the second round of the Junior C Championship tonight, after a second half rout against Na Fianna at Hyde Park, where it ended Cuala 2-12. Na Fianna 0-09.

There were few highlights in a disappointing first half were many people underperformed. Including myself, as I forget to bring a pen to keep the scores. The visitors scored the opening three points of the game inside six minutes. But Cuala were soon on level terms through a Keith Keogh goal.

Cillian Greene dropped a high ball on top of the square, where Keogh did enough to stop the keeper from making a clean catch. Keogh had all the time in the world to slap the ball into an empty net. The hosts only scored one more point in the opening 17 minutes through Nick Cosgrave, as the final pass seemed to always be missing from the men in red.

Matty Higgins added a free and two fine scores from play before the break. Damien Hayes also pointed well off his right after a quick flowing move that started in the Cuala half back line. The sides went in level at the break, Cuala 1-5. Na Fianna 0-8.

Patsy and Gerry gave the lads an earful at half time, and it certainly seemed to do the trick.

The second half looked much brighter from the very start. Especially since I had found a pen under a bag on the sideline. The Cuala back six dominated the second half from the very first moment. Daragh Agnew and Dara Lyons pushing the Na Fianna corner forward out wide and forcing him to smash the ball wide and towards the clubhouse.

Na Fianna scored a fine score from wide right after 36 minutes, but amazingly, that would be the last score that the Glasnevin side would get.  Luke Tynan then started a fine move after winning the ball just in front of Brian Ó Ruairc’s goal which set up a one on one for Matty Higgins whose effort was tipped just wide.

Darragh Agnew connected perfectly with the resulting 45, but probably hit it too well. Either way the ball ended up in the back of the net. Owen Hackett is convinced that he got the final touch, while Agnew is certain the ball flew straight into the goal. Unfortunately, The Cuala full back pulled his hamstring when connecting with the 45 and his game was over. He claims to have seen the ball sail into the net untouched, but his view was probably not the best as he was sprawled out on his back.

So congrats on the goal Hackett!

Wing backs Cillian Bass and Conor Murphy began to have a big impact on the game as their powerful runs really opened up Na Fianna. Aaron O’Rourke extended Cuala’s lead to three points after 45 minutes when Bass won the ball inside his own half. Matty Higgins, Aaron O’Rourke and substitute Cillian Sheanon added three more scores in quick succession as Cuala really found their stride.

Kevin Killian was brought on at the back and certainly steadied the ship. The visitors were already looking for goals, but struggled to threaten O’Ruairc’s goal.  A big turning point came with 10 minutes remaining, as a Na Fianna forward tried to force his way through on goal, only for Luke Tynan to push him back 15 yards before stealing the ball and setting up another Cuala attack.

Cillian Sheanon showed his class by adding two smart points, before Owen Hackett scored the last score of the day. Initially, it looked as though his effort was going nowhere, but eventually dropped over the crossbar. Na Fianna had one more attack, but Damien Hayes fouled smartly as a goal chance looked to be on. Their frustrated full forward smashed the resulting free well wide, as the ref blew up for full time.

A very strong second half performance from Cuala, but still plenty to work on ahead of the next round of the Championship.