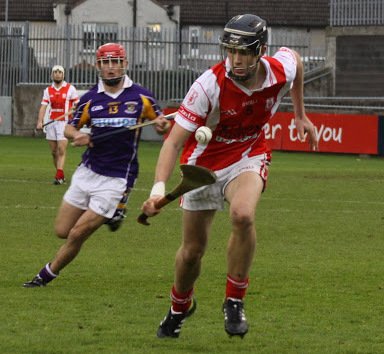 Summer is in. The ball was moving quickly, the striking was pure and conditions were perfect. Seán Moran celebrated his return to senior hurling with a consummate display of skill, touch, balance and accuracy that belied the fact that he was away for so long. His performance was such that he had shrewd hurling men in the Lucan contingent asking who the Cuala number 11 was. Eoghan Breathnach and Jack Phelan in attack were not far behind him and contributed a solid 5 points between them. They worked tirelessly for the cause all day.  Breathnach in particular won a huge amount of ball and caused serious hardship for his opposite number. On another day, with the Hurling Gods on his side, he would have bagged 1-4. Stephen Butler in nets was very assured particularly under the dropping ball and Bobby Browne showed how talented a defender he really is.

Cuala and Lucan were neck-and-neck after 20 minutes on 0-6 apiece with Breathnach and Phelan scoring from tight out on the corner flag. Moran operating at centre-forward, chipping in with a lovely long-range point. Barry Connolly converted three frees. During that period Cuala should have ‘made hay’ in the sunshine but didn’t. Cian Waldron saw a low ground-shot from 10 m fly wide of the left upright with the despairing Mattie Higgins in the corner unable to get a touch on it. Breathnach struck a rasper from 25m that should have hit the top corner, but ultimately flew agonisingly wide.  But ultimately it was the last 8 minutes of the first half that decided the game. Lucan had weathered the red-and-white storm. They began to spray the ball around and hit cross-field balls into their half-forwards. They are a joy to watch when they’re in that mood. Tommy Sommers didn’t spurn any chance and converted three points in seven minutes. Two more from Lucan out on the right put them 0-11 to 0-6 ahead. Cuala couldn’t find the range and would rue the eight wides and two good goal chances missed over that first period. Lucan on the other hand, had missed just three.

Moran was moved to centre-back and Andy Browne took full. The bleeding stopped. Moran hit two points but Sommers was on fire and responded with three from play. Now it was point for point. Waldron took one and Lucan responded, Connolly hit a free, again Lucan struck back. Phelan hit two, but Lucan answered through Sommers and May. It was clear that Lucan weren’t easily going to relinquish the cushion they had built. With time ebbing away, Cuala’s urgency was palpable. Waldron, Phelan and Connolly eventually wore down the lead. At the death Connolly dropped one short to try get a goal but his shot was cleared and the referee called a halt on a score-line of 0-15 to 0-20. A very entertaining game played at a very fast pace.

Footnote 1:   Cuala were down 13 of their starting panel, Lucan were down 6. After four games, Cuala lie joint third in the table on 4 points.

Important message from An Garda Síochána
Scroll to top