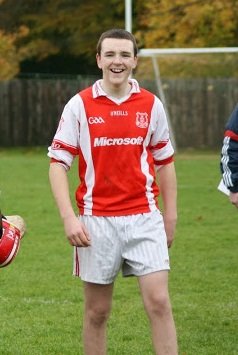 A scintillating 3 goal blitz between the 35th and 45th minute overturned a 5 point half-time deficit and pushed Cuala’s Minor B hurlers to the top of their League. Cuala started nervously and were down two goals within ten minutes as the Lucan team swarmed all over the pitch in the early stages of this exciting game. Cuala were playing second fiddle to their visitors and Lucan didn’t need a second invitation to trouble the score-board. Two high deliveries from mid-field were not dealt with by the Cuala backs and found their way to the back of the net. Seven more points rained over the Cuala bar and it looked ominous for the Dalkeymen. However, when big Tom Sheehan burst through the green-and-white defence and buried his shot to the net, there was a glint of hope for the Dalkeymen. Eventually O’Drisceoil stirred himself and decided to take the game by the scruff of the neck from centre-back and the fight-back began. Himself and Lane were excellent throughout. However, there was still a mountain to climb. The half-time score was 1-5 to 2-7 to the visitors.

Bainisteoir MacGearailt exhorted his troops to deliver the ball more quickly and impose themselves on the game. The Cualamen responded. Cuala got to grips with the speedy men from 12th Lock. Lane played like a man possessed in mid-field and inflicted huge damage up front. O’Drisceoil won huge ball in the centre and anything he missed was cleaned up by O’Floinn and O’Loinsaigh on the wings. MacGearailt, Coronella and McKeown steadied the ship at the back. Di Felice was cool and confident in nets, and was clever with his puck-outs. The play began to open up and Cuala were finding their men with clever, controlled passes. Centre-forward Sheehan was excellent all through and Moran and Maas on the wings began to fire. In the full-forward line McDermott and Molumby stopped their opposite numbers from hurling and blocked every clearance. The game turned. Danial Johnson and Stevie Mc came into the backs and worked like trojons. Lucan couldn’t buy a score. Wylde and McCarthy freshened up the attack and made immediate impacts. Everything was going through them. Lane hit the first goal on 35 minutes following good work by Wylde on the right. O’Floinn threw another to Lane who was felled on his way through. He converted the free. Another long delivery from him within three minutes found its way to the Lucan net. O’Floinn delivered the coup-de-grace with another long delivery and in the blink of an eye Cuala were in the ascendancy and Lucan were struggling to cope with wave after wave of attack. Cuala were blocking and hooking everything that moved. Lucan were jaded and were running on dry. With 15 to go, Gary Moran looked like he had bagged Cuala’s fifth, but the referee blew for a square-ball.  But the Cuala pressure was intense. Within a minute McCarthy’s exocet was not dealt with by the Lucanmen and Cuala finished the come-back on a score-line of 5-7 to 2-9. Cuala scored 4-2 in the second half; Lucan could only raise two white flags over the thirty minutes. Fionn O’Drisceoil and Tiarnán Lane shared the man-of-the-match accolade for their unflinching work-rate from start to finish.

Footnote: Tonight’s win over table-toppers Lucan puts Cuala on top of the League on 9 points with a game in hand, Kilmacud Crokes are second on 8 and Lucan drop to third on 6 points.

Next up: Rialto Gaels away on Sunday 4th May 11am.

3rd Team Hurlers Box Above Their Weight
Scroll to top