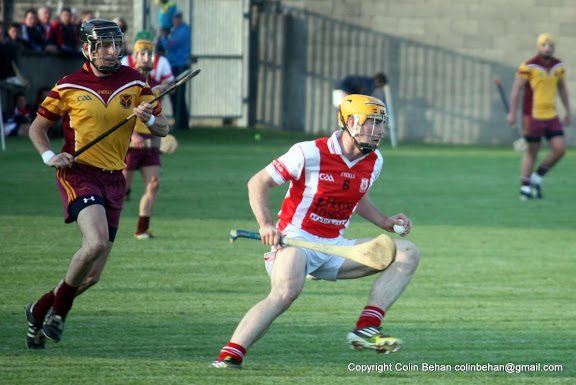 Speed, power and accuracy were the hallmarks of this scintillating performance by our senior hurlers in this Division 1 League game against Na Fianna in St. Mobhí Road on Saturday 24th August. Four well taken goals and points scored by no less than eight different Cuala players demonstrated the strength and depth of this panel.

Cuala with their four Dublin players back in the fold and Colm Cronin and Ross Tierney available after study duty, were almost unstoppable particularly in the second half where their opponents would only trouble the referee’s note-book on two occasions. Na Fianna played without Joey Boland their talisman at centre-back, and Tomás Brady is out with a long-term knee injury, but to their credit they never gave up the fight to the death. They started the brighter and started asking questions of the Reds defence early on. They could have been two goals clear after 3 minutes were it not for the bravery and agility of Seán O’Braoináin in nets. His first save was a ‘one-on-one’ with the full-forward where he came off his line to prevent a certain goal. He was assured under the high ball and steadied the ship in those nervous opening moments. Cuala settled to their task and began dominating in the half-back line where Stapleton, Gough and Timlin began to boss proceedings. Cronin was immense at mid-field and his strength and power going forward caused a lot of problems for the Fianna mid-field. He clipped over three fine points from play over the hour. David Treacy and Mark Schutte have developed a great understanding between them, but it was the sheer quality of the balls into them that gave them the advantage over their jailers. Schutte and Fitzgerald had clocked-up two points apiece by the end of the first quarter, but the first goal wasn’t long in coming. Treacy latched onto a low ball 35m out on the left and turned for goal. He ghosted by two defenders, raced clear and, as the Na Fianna rear-guard came to greet him, it looked like he had gone too far wide. But he pivoted full-circle and struck a low ball goal-ward from a difficult angle as the defence embraced him. The ball bounced along the goal line and caught the corner of the net. Cronin and Schutte took a brace of points each and Connolly took one from play to leave the scores 1-12 to 0-6 at the interval.

On the re-start Cuala took up where they left off with some fast, accurate passing and finding players in the clear. It was magic to watch if you were a Dalkeyman but Na Fianna must have felt at times that they were chasing shadows.  John Sheanan announced his arrival with the first of his three long-range points and cousin Colm took a nice opportunist point from out on the left. Everything Cuala touched turned to gold. A side-line cut by Connolly 35m out on the right was almost comical in its delivery. As he struck the shot, his hurley broke and, as everyone watched the boss of the hurl somersaulting across the field, the sliothar flew directly into the net! Na Fianna knew it wasn’t going to be their day. Towards the middle of the half, Treacy was upended on the 21’ and bounced the ball off the ‘tarmac’ in front of the defenders with the resulting free. The ball went ‘pin-ball’ style through a sea of legs before settling in the back of the net. On the turn for home, the score was 3-17 to 0-7 points, but Cuala hadn’t finished. Fitzgerald took a low ball 14m out wide on the right and turned to race goal-ward. As he moved goal-ward along the end-line, his defender broke his stick trying to stop him in his tracks. He treated the tackle with contempt and hit an Exocet from a difficult angle to hit the target. Seán Treacy, Conall O’Giollain and Rob Reid were sprung from the bench to add spice to the game and the game ended on a score-line of 4-21 to 0-8. Cuala now lie 9th in Division 1 on 8 points with 2 games remaining. There are three teams below them, Na Fianna on 7 points, and St. Brigids and Crumlin both on 2 points.

Footnote: The final match in the Group stages of the Senior Hurling Championship is provisionally scheduled for Sunday 15th September. All four teams in the Group are on 3 points which means that the winners of Cuala v Lucan Sarsfields and Craobh Chiarán v O’Tooles will progress to the quarter finals.  Lucan lost today to St. Judes 3-17 to 1-12 in the League.

Next up: Senior hurlers have two League matches remaining against St. Brigids at home on 7 September at 18.00 and O’Tooles away on 21st September in BlundenPark at 17.30.