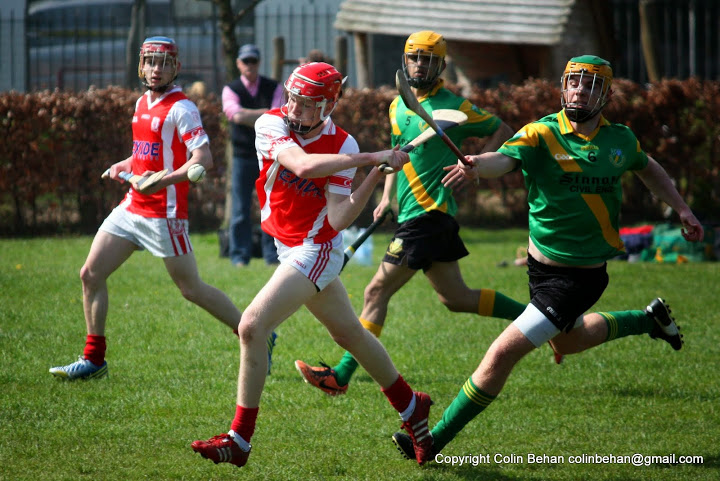 A rich mixture of youth and experience interlaced with some brilliant hurling skills was enough to see off Thomas Davis’ challenge in the first match in the Championship for the 3rd Adult hurlers played in perfect conditions in ShanganaghPark. Thomas Davis are a full two leagues above Cuala and playing at the top of their division, so it was with some trepidation that Cuala came out to face them. Evergreen Eoghan Dunne went some way to settle the nerves with the first of his 9 points on 3 minutes, but Davis responded with two quick frees. Dunne again stretched the lead to two on 9 minutes when an unfortunate incident in which Cian McCarroll was injured, was followed by a straight red card for the Davis’ left half forward for a striking incident. The extra man turned the game for the Reds. Cian Byrne was slotted into the pocket and played a fine role of sweeping behind his half-backs and supporting his full-back line. Dunne was unerring from the placed ball, Simon Cullen and Odran Waldron were devastating up front and the two Bass brothers chipped in with two lovely points before the interval. Eoghan Dunne took a ball out on the right, took on his man and passed inside where Waldron made no mistake, and buried his shot to the net. The half-time score was a comfortable 1-11 to 0-5 for the Dalkeymen.

The game opened up in the second period and Dan Holden, Cullen and Ciaran McDermott began to exploit the extra space and found holes in the Thomas Davis defense. Eoghan Dunne had the first of his three goal chances on 39 minutes. Cullen was brilliant at corner forward. He took a low ball in front, turned for goal but unselfishly played the sweetest of passes across the centre. Dunne, 25m out, caught it under pressure and let fly but saw his shot deflected away by an in-from Thomas Davis keeper.  Cuala were now first to the ball everywhere and were lording it in mid-field where Matie Higgins and Cillian Bass were driving forward at every opportunity. Kevin Roche, Neil Kelly and Rory Doyle were now in the half-back line and dominated the middle third of the field. Doyle in particular was linking up well with his full-backs and cleared a lot of good ball into the attack.  He also kept the Davis best-player very quiet all through. Against the run of play, the Tallaght players were thrown a life-line when a mis-hit free was deflected off a hand and shot past the helpless Stanley in nets. Cuala were still 1-13 to 1-6 ahead but Alan McCarthy, Dan Holden and Cullen again put the same distance between the teams. Eggy Dunne his second blast at goal but this time the ball hit the upright and came back off the metalwork. Dan Holden tried again from 25m out on the right but again the keeper was up to the challenge.  Dunne hit another for a point but the ball was going wide when Sio intervened. He batted the ball goal-ward and was unlucky to only score a point. The final score on a good day for Cuala hurling, 1-20 to 1-8. Eggy was frustrated that he didn’t find the net , but the Tallaght keeper earned his corn today and, when he removed his helmet, he looked to be as old as Bainisteoir Barron!!

Footnote 1 : Wonderful to see twelve of the U16 hurlers out supporting the 3rd Team, and management would like to thank all in the huge support that came out to shout the lads on.

Footnote 2: Nice to see Colmán O’Drisceóil and Simon Cullen as Captain and Vice Captain for the year. We wish them both the best of luck for the season.

Footnote 3: Many thanks to Ciarán in the Druids Chair in KillineyVillage for giving the team and supporters soup & sandwiches after the game.

Next up: 3rd Team Hurlers are asked to play a challenge next Tuesday week against the Cuala Minors. The next game is in the Championship against Na Fianna in Collinstown Ave at 3pm on Sunday 11th May.