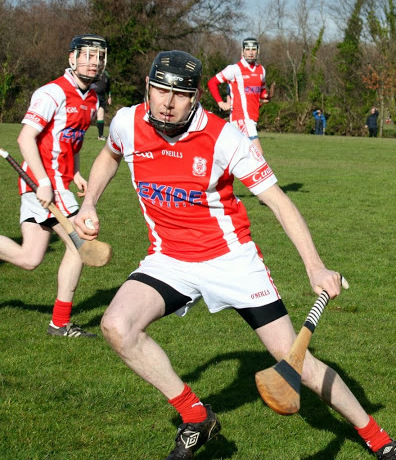 It was a cool night and the lights were on. Summer turning into Autumn. A perfect night for hurling on a perfect surface. Ogie Ryan rolled back the years with a scintillating haul of 12 points, 7 from placed balls. His movement, his accuracy and general play caught the eye from the start. Ray Walshe at full-back wasn’t far behind him. He hardly put a foot wrong all night and together with Kevin Killian at centre-back, dominated the Cuala defence. Eamonn Drumgoole gave his performance of the year scoring 3 from wing-back in the first period. Everything he touched turned to gold. Oisin McCann took over the baton in the second half showing some lovely touches. Anto Higgins is blossoming into a tidy corner-back and marshaled the line with Kevin Roche in the other corner. ‘Chief’ Conor O’Sullivan took 1-1 form play and showed real awareness of the players around him. His goal on 19 minutes was mouth-watering. He took off on a diagonal run from corner-forward and took possession of the ball on the 50’. He turned past his marker, soloed through for goal, beat two defenders and hit a low, fast ball to the corner of the net past the diving Eire Og keeper. New Dublin Manager Liam Sheedy would have liked that score. Lovely hurling! Mattie Higgins and Alan McCarthy were bossing midfield and Dylan Kennedy on the 40’ ensured a tidy supply of ball into Ogie and his cohorts Conor Bass and ‘The Chief’ on the full-forward line. Ed Monaghan and Jack Butler were winning their battles on the wings and taking a lot of possession from the huge puck-outs of Di Felice in nets. Half-time score 1-13 to 0-6. Denis Monaghan, Shane Bass and James McCarthy entered the fray at half time and added to the pressure on the Eire Og side. But the Greysones outfit began their own fight-back. They came out with more fire and passion and the game became a real contest. Di Felice had to take down an attacker to stop a goal. The penalty was saved, and the ball cleared. Eire Og were now growing in confidence and applying pressure up front. Cuala were conceding frees. They eventually took their goal with 5 minutes on the clock, but it was too little too late. Cuala ran out victors on a score-line of 1-17 to 1-13. A good night’s work and good preparation for the League battles to come!

Footnote: Great to see the team’s appreciation given to Ryan Di Felice who is one of the first ever Dublin hurlers to win the all-Ireland U16 Arrabawn Tournament in Tipperary over the weekend.

Next up: The 3rd team have three important League games to complete the season. Ballinteer away on 14th September 15:00, the big one against contenders Castleknock on 28th September 15:00, and Fingallians away on 12 October 15:00. 3rd team training ShanganaghPark Wednesday evening at 18:30. Another challenge game will be scheduled for the weekend depending on player availability.