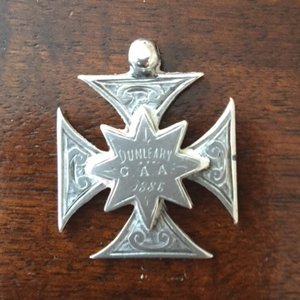 Cartlann Digiteach Cuala was recently shown this fascinating picture of an 1886 GAA medal. The holder has asked for Cuala’s help in learning more about the club whose name it bears –  “Dunleary GAA 1886“.

Now we know that Cuala draws its ‘pedigree’ from a variety of clubs that existed throughout the old ‘borough’ (See Who do you think you are) but we’ve never been able to identify how this particular team was, if at all, linked to Cuala. Here’s what we know –

The name Dunleary was the earliest name for the tiny village that was to grow into the modern town of Dun Laoghaire. Based originally around the present day Purty Kitchen, the modern town expanded rapidly in the 18-19th century, was re-named Kingstown in 1821(in honour of the visit from King George IV). Its hardly surprising that clubs founded on the principle of promoting gaelic culture would continue to deploy the older name.  In fact, by 1920 this native identity had grown to such an extent that Kingstown changed its name to the original gaelic form of Dunleary – Dún Laoghaire (The Fort of Leary).

But back in 1866, “Dunleary” was one of just 8 clubs affiliated to the then fledgling Dublin Board. These were Metropolitans, Davitts, Faughs, Freeman’s Journal Hurling, Drapers Apprentices, Grocers Assistants, Golden Ball and Dunleary. Interestingly, the latter two were the only ones based in specific localities. Later that year, a “JJ Cullen” from Dunleary was elected to the Dublin Board as was a “JJ Reilly” from Loughlinstown.

We reported previously of players from Dunleary  being present at a monster tournament in Thurles on Easter Sunday 1886. Dublin football was represented by Faughs, Davitts, Bray Emmets and Dunleary (the official programme may have mentioned “Kingstown”). The only Dublin hurling team there on the day was Metropolitans. Might the medal have been set to commemorate the Dunleary men’s participation in that seminal event? We’re not so sure – because one would imagine such a medal would bear some reference to the tournament itself or its hosts, Thurles Sarsfields.  Similar tournaments were held in and around Dublin that year but we know of no event hosted or organised by Dunleary. 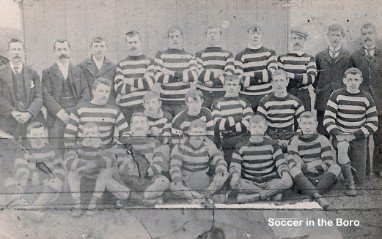 Dunleary GAA was still going strong in 1887  and by now had local company with the likes of Dalkey (Football), Geraldines (Cabinteely), Killiney and, wait for it, Mitchels. Based in Glenageary/Glasthule, Mitchels was probably one of the reasons why “our” St Begnets GAA was re-named Dalkey Mitchels in 1962. The Glasthule version was active until at least 1917 when the transfer of Thomas Cassidy to St Begnets GAA was sanctioned.

By 1888, Dunleary’s JJ Cullen was appointed GAA Records Secretary. And another local resident JF Meagher was appointed Dublin Treasurer. After that, the Club name seems to disappear only to return several years later in various guises.  e.g.

So, as yet, we know that Dunleary GAA existed but we still cant say what, if any, roots they contributed to the great Cuala family tree.  Cartlann Digiteach Cuala would love to know more.  Can you help?