The excitement is building around Dún Laoghaire and surroundings as Cuala football supporters contemplate their team’s Leinster IFC encounter with Monasterevan CLG in Newbridge on Sunday.  And the Kildare faithful are showing just as much interest in this unique fixture.  We’re hearing the match will be broadcast live on Kildare FM so fans of both teams can stay in touch with proceedings. 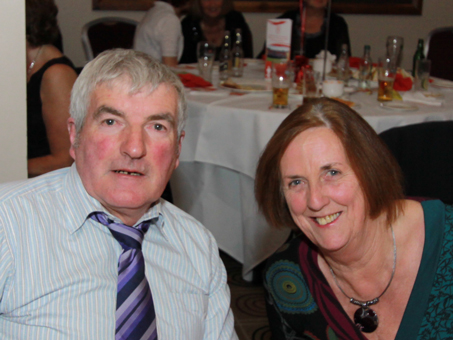 But you know there’ll be some Kildare fans who’ll be cheering for Cuala?  The Cuala Sponsor,  Peter Dunne, recently retired  “victualler to the stars’ and a true Lillywhite, hails from Carragh,  and played with Raheens before moving to set up shop in  Glasthule-on-Sea and sharing his skills with the Dalkey lads.

And his wife Mary is looking forward to the trip home to her birthplace, Newbridge where her Cox family ties with Sarsfields will undoubtedly be  useful in gleaning valuable intelligence about our worthy opponents.  And of course Peter and Mary’s main focus on the day will be on encouraging their son Derek who is Banaisteoir of the Cuala seniors.

So here’s hoping for a Dunne deal on Sunday and all the best to our footballers and their managers too.