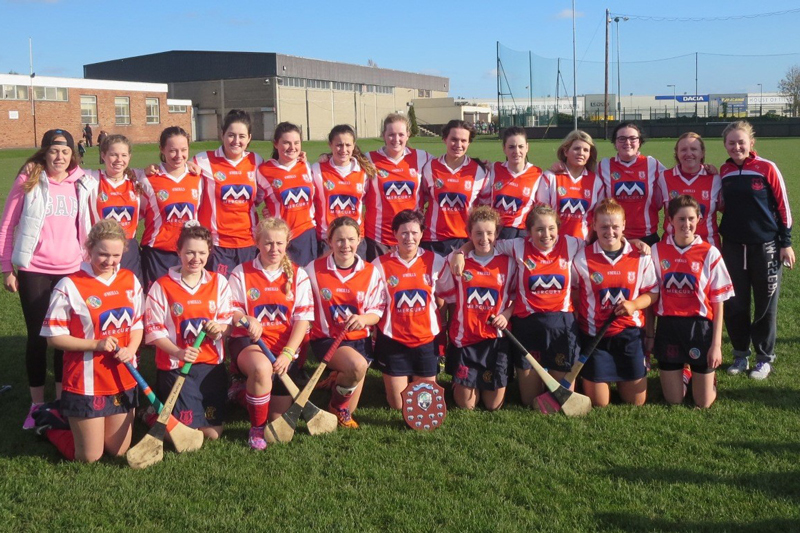 After a seven year wait since our last trophy at adult camogie level, a new look Cuala team brought home the Adult 7 Championship Shield to Hyde Park after a very comprehensive win against Erin’s Isle in the final.  Made up of this year’s minor panel, 5 U16s and 5 ‘over 18s’, the full team really rose to the occasion leaving their best display of the year to last with a 4-15 to 0-1 victory. Having only returned to adult competition this summer the win is a great bonus and augers well for next season when we return to the adult leagues.

The morning was bright but cold and with a stiff breeze blowing diagonally across the pitch as both teams took the field.  The game was played on Erin’s Isle main pitch in Finglas, a particularly big pitch but in perfect condition – both aspects suiting Cuala’s style of play. Cuala won the toss and opted to play with the breeze. Both teams were tentative in the opening 10 minutes with Cuala slowly playing themselves into the game. The visiting side created a number of chances in this opening period but were unable to take any scores with the Erin’s Isle goalkeeper on top form. The growing Cuala pressure finally paid dividends 11 minutes in with a great point from a difficult angle from the side’s top scorer Katie O’Dea. 2 minutes later and Katie doubled her and Cuala’s tally with another point. Mid way through the half it was still anyone’s game with only 2 points separating the sides. The first crucial score of the game was to follow shortly however when team captain Niamh O’Connor, fresh from scoring 3-1 in a 10 minute blitz in the semi final against St Finians, was first to a breaking ball to rifle the ball to the back of the Erin’s Isle net. The score was a real turning point lifting the whole Cuala team who dominated the game for the remaining 14 minutes of the half. In that time centrefielder Juliette O’Flynn added 2 points, the opening one from a free from 40 yards out, Asia Kirwan scored a magnificent point under pressure and Katie O’Dea added another 1-3 to the score line, the goal coming right on the stroke of half time and another significant blow to the home side going in at the break.

During the opening half, Cuala’s full back line had hardly been troubled with Mairead Kenny and Catherine Garner picking up any loose ball and clearing down the wings. Deirdre Ni Thighearnaigh was equally impressive while the half back line was dominating with dual star Leonie Buckley playing one of her best camogie games for Cuala at wing back. At centrefield Juliette O’Flynn was running the show and along with a lively Asia Kirwan was centrally involved in some of Cuala’s best attacking moves.   Up front Julie Newman was full of running with her first touch causing all sorts of problems for the Erin’s Isle half back line while in the two corners Niamh Dunne and Orla McMahon were putting in some trojan work making it very difficult for the Erin’s Isle fullback line to clear the ball.

Despite their lead, the Cuala girls remained very focussed at half time. Playing into the breeze in the second half, they didn’t need reminding of the semi final in Meadowvale the week before when they went in at half time leading St Finians by 4-7 to 1-1 only to be outscored 2-1 to 0-1 in the second half.

The lesson from the semi final was well and truly learnt however and there was no sign of complacency in the second half. The opening 15 minutes were similar to the first quarter with both teams fairly evenly matched. The second half Cuala half back line of Hannah Nash, Eleanor Moore and Cara Sullivan were impervious however and snuffed out any potential Erin’s Isle attacks almost before they had begun. Another Juliette O’Flynn free from 40 yards opening the second half scoring 6 minutes in and she added a second point from play 5 minutes later.

Like in the first half however, Cuala’s youthfulness showed through in the closing 15 minutes. Scores from Katie O’Dea and Juliette of Flynn kept clear daylight between the teams. With Ciara Ni Dhalaigh rock solid in the fullback line and Caitlin Byrne making the most of her freedom playing out of goal for the closing 20 minutes, Erin’s Isle never really threatened and it took the home side 20 minutes to register their only score of the game. In fairness it was the least they deserved and despite the big Cuala lead they never gave up and made our girls work for every score.

Up front for Cuala a lively Sorcha Barron and Cybi NicGearailt were causing the Finglas girls all sorts of problems, while Orla Quill kept the Erin’s Isle goalkeeper busy forcing 2 saves from 2 snap shots while one of our U16 stars Niamh Collopy belied her young age playing a pivotal role in the centre where she never stopped running between the two ‘45s for the whole game.

In the final 5 minutes Cuala ran riot putting the home side to the sword in ruthless fashion with Katie O’Dea adding 2 points to finish with 1-9 to her name and Orla Quill notching 2 opportunist goals, the second on the stroke of full time, the final score line showing Cuala 4-15 vs. 0-1 Erin’s Isle.

The 7 year wait was over and County Board chairman Pat Martin presented the Shield trophy to Cuala Captain Niamh O’Connor, fittingly Cuala’s last captain to accept a trophy on behalf of a winning Cuala adult camogie team back in October 2007, when Cuala won the Junior Shield – the equivalent to today’s Senior 7 Shield. Along with Niamh, another of today’s players Mairead Kenny was also part of that last Cuala team and two of today’s players Asia Kirwan and Cybi NicGearailt had mothers Emma and Rachel playing that day. It was a proud day for all and another significant milestone in the rejuvenation of adult camogie in the club.

Cuala were well supported on the day with special mention for team panellist Staci Kennedy who came straight from Florida via Dublin airport to cheer on her team mates.

Spare a thought for a brave Erin’s Isle side on whom the score line was not a true reflection of the way they played as they battled to the end and were just very unfortunate to face a Cuala side at the top of their game and in a ruthless mood. It was the Erin’s Isle’s 3rd team, a great achievement, and something Cuala can realistically aspire to at adult over the coming years.

Congratulations and well done to all concerned. Roll on 2015 …….. we’re definitely back ……