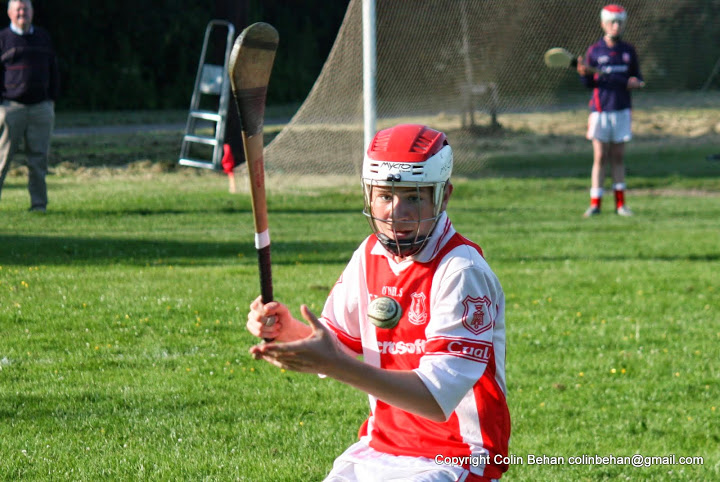 In Hurling, goals win games. The constant pressure told in the end when Cuala scored 2-3 in the final quarter of this tense affair in Sancta Maria, but unfortunately it was too little too late for the Dalkeymen. Cuala came down the M50 with a much depleted team and it was the pace of Ballyboden’s two inside forwards and the exceptional quality of their goalkeeper that would tell at the death. Cuala hammered away at the Ballyboden defence for much of the game only to see the emergence of another fine exponent of the net-minder art come from the ScholardstownRoadHurlingAcademy.

Cuala started the game as they always do with fire and brim-stone, and put serious pressure on their near-neighbours. By the 5th minute, Cuala had spurned two frees but had lost Mickey Wylde to a head injury. Ominously though, Boden’s right corner-forward had already crashed one off the cross-bar. He would claim three goals by the finish. With troops in short supply, Cuala had transferred some of their heavy-artillery to the forward positions, but this left openings at the back! On one of their forays down-field, Boden’s centre-forward coasted through on a loose break-ball and crashed one past Di Felice in nets. Cuala’s response was immediate. Neasán MacGearailt won’t score a better goal in his career. With seven backs in attendance, he picked up a ‘dirty ball’ in a ruck 15m out on the right, pushed passed one then two, then three defenders, soloed once and burst through the remaining cover for the line. What a wonder-goal! Ireland’s Brian O’Driscoll would have been happy with it. Sheer strength, heart and determination had made it for him. But Cuala were playing it risky at the back. With ten minutes to go in the half, Boden had clipped over two frees but the game was still in the balance. Both Boden’s corner-forwards were quick and hot to handle. The right-corner took his second just before the interval. But again Cuala would not lie down. In extra-time, MacGearailt had another goal chance. This time he took a ball out on the left, close to the end line. He went past the defender and hit an angled shot through the cover. The Boden keeper dived to his right and stopped what looked like a certain goal. Cuala went into the break frustrated but determined on a score-line of 1-4 to 3-5.

Ballyboden came out with more purpose on the re-start and despite the brilliance of Brian Coronella at full-back, within minutes both corner-forwards had raised a green flag. Cuala now had a mountain to climb. But climb they did. Eoghan Potts came in as an U15 and made a name for himself. James Murphy at centre-back was now left free in the middle and was launching attack after attack onto the Boden defenders. But the Boden keeper is an impressive operator and calmly handled everything that was thrown at him. Fionn O’Drisceóil at centre-forward was winning his battle up front and Mark O’Treasaigh and Stevie McDonnell began to drive at the Boden defence. Emmet Murphy began to orchestrate opportunities. A 21m free was driven low by O’Drisceóil but pushed over. High balls were now raining down on the Boden goal. Eventually the dam would have to break. Joe Mahony and Stevie Mc pulled on a high one. Joe would claim the point. Another break ball in front of goal was pulled on by McDonnell, this time the net rattled. Cuala were in the groove and Boden were rocked back, but the sand was draining away. Another goal by Big Joe arrived with 10 minutes to go again from an overhead pull to cut the deficit to 7, but Cuala were now running on empty, and the effort was immense. Boden broke away for a couple of loose points as Cuala pressed forward. With two minutes remaining, Boden went low with a 20m free. Di Felice saved it but the corner-forward batted in the deflection to take his hat-trick. Despite giving it everything, Cuala conceded on a demoralizing score-line of 3-08 to 6-10.

Footnote: Cuala lie mid-table in the League after 9 games with 5 games to play.

Next up: Kilmacud Crokes in Shankill at 15:30 on Saturday 9th August and away to Whitehall Colmcille on Saturday 23rd August at 15:30.