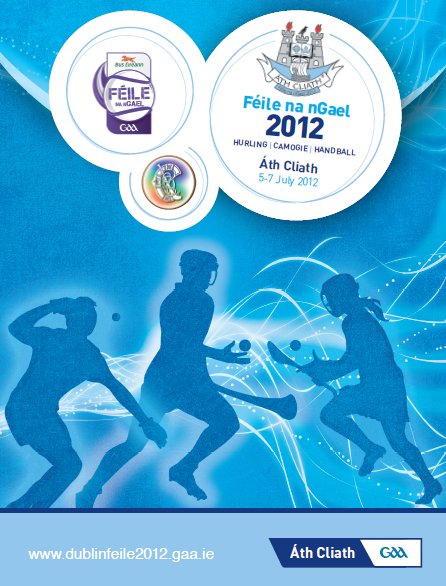 The opportunity to play at National Féile is one afforded to very few but in 2012 Dublin played host to Féile na nGael enabling our A and B Hurlers and our Camogie team to take to the field against the best of the best from around the country.Events kicked off almost a year ago and the work put in by so many people throughout the club came to fruition on Thursday when all three of our teams hosted St John’s of Belfast, De La Salle Waterford and St Dominic’s of Roscommon at a fabulously decked out Hyde Road.  The first two games were hard fought encounters against teams that would go on to compete in the final stages of the tournament.

Then it was the turn of the B’s against the determined and skilful men of the West.

A glorious start saw Craig Finn drop a ball into the small Square and Paddy Lewis pounce like a cat to burst the net with barely 30 seconds on the clock.  A free was won from the puck out and Fionn O’Tighearnaigh pointed with great accuracy to add to a dream start for Cuala.  This is a team that came through last year with one win to their name but who stuck together, trained together and eventually came through together.  They sit atop Division 5 in Dublin with eight consecutive wins to their name, clear of any other second team in the City.

They did not often though come up against a player like John Murray.  John was playing Centre Forward for St Dominic’s and turned the game on its head with four goals in a ten minute spell before the break.

The second half was a more even affair with another Fionn O’Tighearnaigh free and a Tiernan Dunne strike from 40 yards giving the Cuala faithful on the steps hope.  At the Back Cillian O’Feinneadha, Nessán McGearailt and Mikey Power were on top of their men but a rain of pressure from Shane Molamphy, Bernard O’Sullivan and Lorcan McGrath could not get the breakthrough we needed.  It eventually came when Jack Hartnett won ball on the left, was blocked but won it again and powered through to score a second goal and send us to the parade with a spring in the step.

Easkey from Sligo, with an impressive preparation behind them were first up on Friday but this was a tough encounter against a side on top of their game and determined to give no quarter.  Despite a great performance at the back from Mikey and Charlie Crown especially, the best that we could take from the  is we won the last five minutes and after another run on goal from Jack was thwarted,  Fionn O’Tighearnaigh was up to the task of marking the board with a well taken free.

The last group game was to win the pride of the Dublin Parish with Lucan Sarsfield B’s equally determined to get something from Feile.  Two points from Jack and two from Lorcan sent us to the break four points to the good with Davy Nash dominating the midfield, Jack Handrick marauding from wing back on one side and Cathal Scanlon alongside Liam Lysaght causing trouble in the Lucan full back line. Cathal Gillen came close with a lovely flick that just went wide and Peter Jackson was running with strength through their best tackles.

Whenever Lucan pressed Mark Cunningham, Eoin Puplett, Kevin Kirwin and Conor Doherty were well up to the job before Bernard O’Sullivan and Paddy Lewis stretched the lead to six.  There was a flutter of nerves when Lucan netted on the near post but Tiernan then landed a goal and a point to secure the win and Leave Cuala as Champions of what was possible.

A great weekend of sport and friendship; the very heart of what Feile and the GAA is all about.