Who was this team and how do they integrate into the Cuala Story?

The picture was kindly presented to Cuala by Frank Mullen, Dalkey Utd. in 1995 and, as the incription of the ball shows, dates from the 1920-21 season. The man “in possession” of the ball is Leo Ledwidge and is almost certainly the brother of Jack Ledwidge of the 1920’s Cuala Hurlers – they resided at Dalkey Avenue. Leo would have been about 18 at the time.

The term “United” might offer a clue as to the origins of the team. It was often used in the name of clubs that formed from the amalgamation of older struggling sides. For instance, we’re aware of an earlier United Gaels that was formed in 1915 by the coming together of Tallaght Davis, Hibernian Knights and O’Donovan Rossa’s. Though this seems to have been short-lived as there are indication of disquiet there by 1917.

In the period 1918 – 1921, there was a United Gaels based in Greystones/Kilcoole. There was certainly a Dunleary-based United Gaels too. They played Senior Football v McCracken’s in the Phoenix Park (Jan 1921) and took part in the Crumlin Tournament (Jan 1918) where they were drawn against Glasthule Mitchels.  In November 1918 at Cabinteely, they played St Mary’s in an Intermediate Football fixture. Its safe to assume that the lads pictured here were the same team.

But there was an even earlier “Kingstown United Gaels” who featured in October 1903, when they beat McCracken’s in a Junior League fixture in Monkstown (present day Sailors & Soldiers Field on Monkstown Avenue) – a victory which was converted to defeat in the County Boards rooms when they forfeited the result due to fielding an ineligible (un-named) player.  We can see no indicators that this United side lasted long. 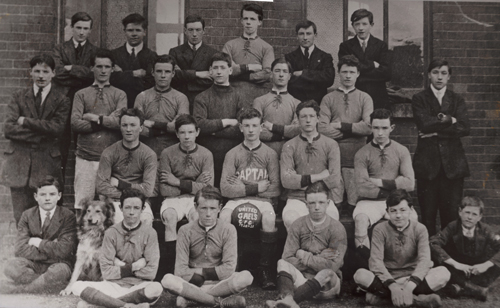