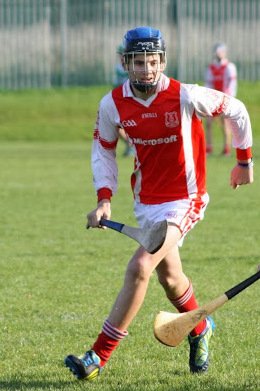 The giants came out to play in ShanganaghPark on Saturday 12th April. Whitehall had huge men at centre-forward, full-back and full-forward. O’Drisceoil needed a step-ladder to get anywhere close to his opposite number, Coronella needed a pole-vault to get to his. But Cuala had hurling giants all over the field. Murphy was outstanding at wing-back. His reading of the game, his strength in winning possession and his wonderful use of the ball must make him Dublin material. He was a rock in defence. O’Floinn is not far behind. He closed down his opposite number and launched a number of attacks from wing-back. O’Drisceoil is maturing into a solid centre-back. Maas was class in mid-field. He had three or four wonderful blocks, he was always first in the queue to clean up the dirty ball and he won turn-overs that he was in no way entitled to. Lane, his partner in crime, was Napolean in mid-field. He controlled his troops, he was always available, he linked the play and commanded everything that was good for the Dalkeymen.  Cuala’s ‘Little General’ scored four from play, ghosting up the centre and finding good positions to take scores. But O’Treasaigh conducted the orchestra up front. He won great possession with brave catches and by storming out in front of his man to feed his hungry forwards. Everything he touched turned to gold but he selflessly worked for his team. The forwards buzzed around him. Big Joe Mahony and Fionn O’Tighernaigh took advantage of his generosity and bagged two wonderful goals on 15 and 19 minutes. Fionn O’Tighernaigh continues to climb the hurling stairs to greatness and scored 1-1 from play. Mickey Wylde and Stevie Mc tagged on two points from close in. Fionn Myers took Cuala’s third goal 5 minutes into the second half to leave Cuala with a 15 point lead 3-13  to 2-1. Coronella, Quinn and Mac Gearailt minding the back-door, hardly put a foot wrong. McMahon was trying to man-handle another big opponent in the corner. Di Felice made two wonderful saves and put three over from ‘65s. His puck-outs were huge. Emmet Murphy and Thomas McCarthy came off the bench to add to the mayhem. Whitehall to their credit never gave up the fight, and with the wind at their backs in the second period, scored 8 points without reply to try and pull the game out of the fire. But the gap was too wide, and Cuala ran out winners on a score-line of 3-14 to 2-9. Another very classy performance from a Cuala team continuing to grow and mature. They will be a formidable outfit for any opponent over the coming months, particularly in their own back-yard.

Footnote: Cuala’s management and players wish Eoghan Sheridan the very best in his recovery. Eoghan fell backwards in an incident late in the game, banged the back of his head, and was taken by ambulance to LoughlinstownHospital.

Next up: Challenge against Naas on Friday next and League game against Clontarf away on Tuesday 22nd April.