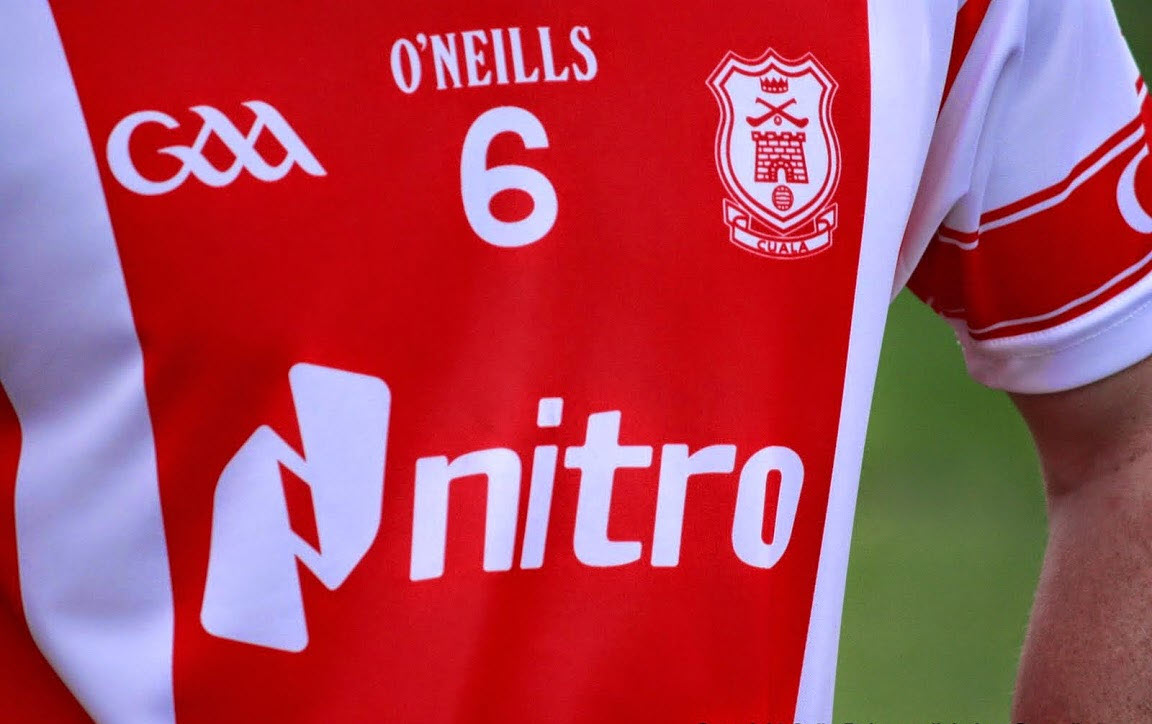 A Thursday evening 7.30 throw in for a home league fixture against Na Fianna in perfect

conditions. It was almost 6 weeks since the last league fixture against Trinity Gaels but

there was no sign of rustiness or lack of appetite in the team. Eyeing the oppositions

league results to date and having home advantage, this was a fixture we targeted as an

opportunity to take 2 league points. As it turned out that was achieved in emphatic

As the score line suggests the match was a fairly one-sided affair. Liam McDermott open our account within a

few minutes. Na Fianna responded with a levelling point but from there on Cuala dominated the possession and

the points from Conal Molumby, Aaron Sheehan, Brian Sexton and a goal from Luke Kelly had us 1-4 to 0-1 ahead

after 10 minutes and we never looked back. Five more points and a goal from Cillian Greene were added in the

another 3 points – our goals coming from Fergal O’Reilly, who bagged a brace after coming on as sub, and the

other from Sio Cullen to add to his 3 points from play on the night.

who put in a top class effort for the entire 60 minutes. In the middle of the park, Brian Sexton and Karl Schutte

provided the platform for possession and a constant supply of ball for our forwards and, for a change, our everreliable

goalkeeper Cormac McGovern didn’t have to perform any heroics between the sticks. A well-deserved

win, 2 valuable league points and in such a tight league, where score difference could come into play to decide

positions, the winning margin might be as good as a third point in the final standings.

Subs: All 5 subs were used

double. Firstly, it came 3 days after the team recoded one of its best performances and

biggest wins. There was no sign of complacency carried over from that victory over Na Fianna

as this was an away fixture and Rosmini were sitting above us in the league table. Secondly,

and more disappointing than being able to deliver back-to back wins, was the nature of the

defeat on the day.

performances between the first and second periods and even with the benefit of hindsight still hard to fathom.

effort. The work rate and attitude to win possession and take scores was very reminiscent of the previous

Thursday night. Luke Kelly added 2 points before Conal Molumby hit the back of the net for our first goal. We

were 1-3 to 0-1 ahead and cruising and notched up another 1-3 over the next 15 minutes, Luke bagging our

second goal. As the game entered the final minutes of the half Rosmini got a goal back, against the run of play,

but we responded immediately, in the best possible way, as Cillian Greene strode in for our third goal. Half

time whistle came and we were looking comfortable on the pitch and on the scoreboard, 3-06 to 1-03. The half

time team talk was a solid “keep it up, no taking the foot off the pedal” and full of commitment.

However, the second half didn’t follow the script. Rosmini got in for a couple of early points without reply to

peg the lead back to 7 and then snatched a goal to reduce it even further to 4 points. The tide had turned

noticeably and while Rosmini had their tails up we were struggling to get back into our rhythm. And so it

continued. Nothing was going right, Rosmini notched up another 3 points and the lead was down to a single

point before we finally got off the mark. A couple of points from Sio and Karl restored our lead to 3 and

temporarily steadied the ship at 3-08 to 2-08. But not for long as we conceded another goal and a point to go 1

behind going into the final stages. Cillian Greene levelled it again but Rosmini popped over what turned out to

be the final and deciding score. A late flurry of attacks by Cuala saw an agonising shot come off the upright –

that’s how close it was. It was a dejecting defeat mainly in the manner it happened but we remain in

contention for league play-off places so all still to play for in the 4 remaining games. Next up is a home fixture

on Sun 12th June against an undefeated Skerries Harps.