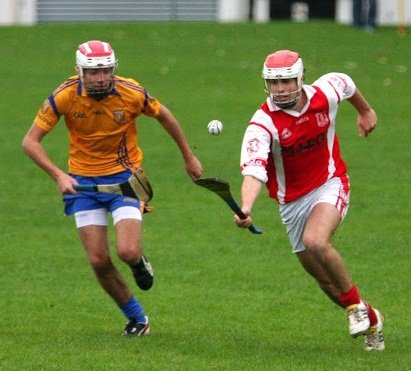 “Hard-work will always beat Talent when Talent doesn’t work hard”  – that was the message given to the Cuala A panel before this ‘do-or-die’ encounter with Na Fianna on Sunday 14th October in damp and overcast conditions in St. Moibhi Road. This wonderfully talented bunch of hurlers had slipped up in the last match against Ballyboden, and knew before the ‘off’ that this match was the making or breaking of their season. They had already taken the League title and are well placed in the Minor Football Championship, but this game would be the key to their Hurling year. They didn’t disappoint! “Fire in the belly and ice in the head” – they played as if their lives depended on it. They gave a display of controlled aggression and showed a discipline that kept the free-count way down. All over the field there were huge performances that inspired.  Na Fianna came with a game-plan to play the ball down the middle to their strong men at 6, 11 and 14. Holding Barrett, Ryan, McHugh and AJ Murphy in mid-field would be the key to success for Cuala.

Drummand took Ryan at centre-back, Killian took McHugh and Murphy put a strangle-hold on Barrett. AJ was a more slippery fish. He danced his way around mid-field until Cian Byrne was mandated to shadow him.  The first Na Fianna puck-out came predictably down the centre. Ryan won it in front and took a score. Jake Malone was immediately dispatched to stand in front of him for the puck-outs. The ploy worked. Jonno Treacy, the Na Fianna keeper had to move to Plan B. Cuala attacked every ball and swarmed around any player in yellow that dared take possession. They were greedier, won the dirty ball and attacked at every opportunity. Treacy, O’Callaghan and Braine were devastating up front and Cuala had clocked up 2 goals within the first 10 minutes. O’Callaghan’s pace and Treacy’s ability to win ball in front and the smart positioning of Braine were crucial in opening up the defence. Na Fianna had to drop a player back into the pocket to tighten their rear-guard. Cuala were up 2-4 to 0-4 after the first quarter. The effort began to take its toll. Na Fianna slowly began to dominate around the middle. Cuala couldn’t get the ball into their inside forwards as Na Fianna turned the screw. The game was compressed down the centre and a 6 point lead was whittled down to the minimum by the break. Running repairs were required.

The introduction of O’Nearaigh to the mid-field was the key. Behan stepped back into the corner, Byrne was happier at wing-back and the defence turned to concrete. O’Nearaigh heralded his introduction with a point from distance. There was much greater urgency about Cuala after the interval and the half-backs and wing-forwards spread the play. Time after time the Cuala forwards rampaged forward. Andrew Murphy and Cillian Sheanan at wing-forward played out of their skins and any indiscretion by the Na Fianna defence was punished clinically by Treacy who ended up with 10 points. Shane Murphy took on Barrett every chance he got and moved the ball forward with every possession. Jake Malone and O’Nearaigh took over the middle. Dowling, Drummand and Byrne tightened the noose and normal service was resumed. Sheanan was having the game of his life. Coming into the home-stretch, Cuala were up 2-10 to 13 points and pressed the accelerator. The Na Fianna engine was driving on fumes. A succession of points from Treacy, O’Callaghan, Malone, Sheanan and a second from O’Nearaigh killed off the Na Fianna challenge in the final quarter. Na Fianna were awarded a 21m free close to the death following good work by Ryan. Cuala put eight players on the line. Na Fianna had to go for goal. The ball was stopped by Behan and the sliothar rolled up, over the shoulder of Dowling. Sean Treacy, who had suddenly arrived from no-where, grabbed it and cleared the ball as the Na Fianna players claimed a goal. The referee’s whistle was mysteriously silent. The Na Fianna line was furious but the decision stood – play on. O’Sullivan came on at the death and was awarded a penalty for an off-the-ball incident. Treacy took the point. Cuala ran out winners on a score-line of 2-17 to 0-14 outscoring the Northsiders by 7 points to 1 in that final period. A hugely entertaining game full of passion, fire and no little skill!

Next up: Cuala now prepare for the semi-final of the Minor Hurling Championship against Kilmacud Crokes in two weeks time. Ballyboden meet St. Vincents in the other semi.

Footnote 1: The Cuala B team is also through to the semis of their Championship after another fine win again over Na Fianna in Shankill.

Footnote 2: It was wonderful to see the senior hurlers out in force to support the Minors. It must be a great feeling for the players to see the likes of David Treacy, Mark & Paul Schutte and Cian O’Callaghan coming onto the field with water and a word of encouragement?