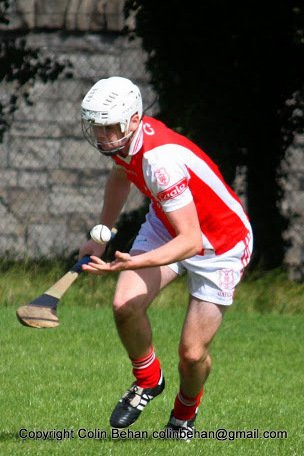 A series of poor wides and some breathtaking saves were ultimately the difference between these two skillful teams on a perfect day for hurling in this compelling Minor Championship hurling round-robin match in ShanganaghPark. Cuala had the lion’s share of possession throughout the game but the more clinical finishing by the Crokes forwards, and a series of brilliant saves by the Crokes ‘keeper at the death was ultimately the difference between the sides. The game was played at break-neck pace and both defensive units were prevailing in the early stages. With 25 on the clock, the teams were neck and neck on 0-3 a piece, everything to play for. Cuala were dominating possession but had already registered four wides from distance. Their defenders and mid-field were pushing forward looking to press home their advantage, when a missed tackle around the middle led to an overlap situation at the back. Using the extra man, the Crokes forwards cleverly worked the ball into the inside line and Di Felice had to make a point-blank save one-on-one with the full-forward. The Crokes centre-forward was quickest to react and tapped the ball over the line for the opening goal. Almost from the puck-out, Crokes won possession and again worked an overlap to get through on goal. A half-hit shot was deflected to the net to give them their second goal. Within the space of a few minutes, Crokes had turned the game. Cuala responded and stormed up-field. Jake Malone hit Con O’Callaghan with a pass. He hit a sweet point. But from the puck-out, the Crokes mid-fielder took a long-range point from out on the left. Cuala again reacted well, worked the ball forward, and O’Callaghan flashed a screamer wide of the right upright from 25m. The Dalkey supporters in the huge gallery winced in frustration. O’Naoire took possession and cleverly passed it out but another wide was registered. Cuala just couldn’t find their range. In the 5 minute period before half-time Cuala, despite owning the sliothar, had spurned a number of good chances, but Crokes had registered 2-1. They had taken the few chances they had. The teams went into the break on a score-line of 0-4 to 2-4.

Cuala came out of the huddle a different side. Malone now began dominating at centre-back O’Callaghan was hovering up possession at mid-field but was noticeably fouled every time he was on the ball. The referee flashed two yellows in response. Two more bad wides in the opening minutes didn’t help the Cuala cause, and piled on the frustration for their supporters. But O’Naoire was now making hay at full-forward. A nice passing move involving Dave Ryan and Fionn O’Drisceóil gave O’Naoire a point. Crokes responded but hit the side-netting at the cemetery end. Donal Lane was finding space around the middle as Crokes retreated to defend their lead. Shane Murphy and Donal Lane combined and Murphy blasted one from 20m. The goalie made a brilliant save but O’Naoire finished to the net. Cuala were now in full flow and the deficit was only a goal, 1-6 to 2-6 with 25 minutes remaining. Another foul on O’Callaghan, but the long-range free was missed!  O’Naoire was showing well at full-forward and was fouled, but again the free was spurned. Cuala could not afford such extravagance! Justin Byrne took a point out on the left but Crokes scored a free to keep the 1 goal gap 1-8 to 2-8 with 15 minutes to go. Cuala were now finding holes in the Crokes defence and two brilliant saves from the Stillorgan keeper off Justin Byrne kept them in it. A goal at that stage would surely have swung the momentum in Cuala’s favour! But Cuala’s effort was energy-sapping. In pushing forward, Cuala were leaving holes at the back. The Crokes 15 was left all alone on the left wing and clipped over a point. Cuala squandered another one. Con O’Callaghan made a great catch and turned for goal with the whole Stillorgan team in tow. His thunderous shot was saved again by the Crokes keeper who was having one of those days. Another O’Naoire point kept the single goal between the teams with 5 minutes to go. Cuala were now shooting for goals and pressing forward everywhere. The killer goal came at the wrong end. A long delivery from the back was carried by the strong breeze and bounced around the Cuala square. The Kilmacud 15 couldn’t believe his good fortune as he tapped the ball to the net unmolested. The frustration was palpable. Cuala rampaged forward again. O’Calaghan latched onto another, hit another rasper but the undergrowth was impenetrable and Cuala couldn’t find a way through. Final score 1-10 to 3-11, Cuala would rue those earlier missed opportunities.

Footnote: Great to see such a huge crowd at a local hurling match. Both side-lines were full.

Next up: Cuala now play Naomh Fionnbarra away on Sunday 21st September and have Na Fianna in the remaining match in their Group. Na Fianna beat Fionnbarra 4-15 to 0-8.