There was a stunning rainbow arched across the sky at ShanganaghPark, but the pot of gold was firmly at the Stillorgan end! In dreadful conditions, Cuala came back from the dead in the second half and had a last minute penalty to claim the honours, but opted to take the point and move the game into extra time.

What a game!  It had everything. A gale force wind across the pitch made the game a lottery, a come-back of 11 points by Cuala, penalty chances galore, two teams going at it ‘hammer and tongs’, extra time and a huge crowd of spectators.

Kilmacud arrived with a simple plan – get first to every ball and hunt down every Cuala player in possession. The plan worked right from the off.  Within 4 minutes Crokes had 1-1 on the board and Cuala hadn’t got out of the blocks – a whirlwind start to match the weather conditions. Cuala were rocked back. Treacy settled the nerves with a well taken point from distance. A good save from O’Bráináin left MacGabhan with a ’65 which he converted despite the wind. Cuala began to get to grips with the Crokes forward line and took possession up-field, but scoring into the cemetery-end was tricky. Sheanan and O’Giolláin registered two wides. A fumble from a Cuala half-forward allowed a long delivery into the Cuala full-back line. The Crokes full-forward caught it, turned and was taken down. Penalty! Up strode MacGabhan and dispatched the shot to the net.  In a blink of an eye, Crokes were 2-4 to 0-1 up and winning the dirty-ball all over the park. Worse was to follow for the red-and-whites. A Crokes free 30m out was mis-hit by MacGabhan but found its way to the back of the Cuala net. Cuala went into the break 11 points behind on a score-line of 3-4 to 0-2. It looked like curtains for the Dalkeymen.

Harsh words at half-time and a re-organization of the team had its effect. Cuala began to take charge after the interval, and normal service resumed. It was the turn of the Crokes line to get very nervous. The plan to run at the Crokes defence paid dividends. Crokes couldn’t deal with wave after wave of players coming at them and time after time took them down. Cuala played as if their very lives depended on it. They played with heir hearts now not their heads. Some of their passing was outstanding. They had their first of three penalties on 40 mins. O’Bráináin came from deep and dispatched the first to the net. The Cuala faithful held their collective breath, could a fight-back be on? Treacy clipped over another free and five minutes later, this time O’Callaghan was taken down – second penalty for the Reds. Up comes O’Bráináin for another go – point. Crokes were leading 3-5 to 1-7 but Cuala were in the ascendancy and Crokes could hardly get out of their own half. Treacy burst through the cover and fired an exercet; the Crokes keeper stopped the first but Cian Byrne followed in and buried the rebound. Game on! Treacy followed up with a free to leave the minimum between the teams 3-6 to 2-8. The excitement was palpable. Time was ticking away when O’Callaghan took a pass, turned for goal and was upended in the square. To the delight of the Cuala contingent, Dave Donovan blew his whistle and spread his arms apart – penalty number three! Two minutes left on the clock. Here was the dilemma for the Cuala Management team – go for the goal and win the game, or take the point and take it to extra time. O’Bráináin was already on his way up from the back.  To his dismay, Treacy was instructed to take a point and the game entered extra time.

During the break, Crokes re-organised and threw on fresh blood.  MacGabhan took a leader’s role and turned the game in the Stillorgan direction. With three possessions in the first period of extra-time, he took the game by the scruff of the neck. At the break, Crokes were up 0-3 to 0-1. Cuala couldn’t get ahead! Immediately on the re-start, Cuala coughed up another free. Crokes up by a goal. Cuala were now desperate to respond and took a short free in front of goal. The ball was caught be MacGabhan and driven down field. Cuala now had all hands to the pumps in an effort to get that goal. Murphy was taken down 30m in front of goal with 2 minutes of extra time remaining. O’Brainain was called up to drop the ball into the Crokes square. He over-cooked it and his shot sailed just above the cross-bar. Kilmacud-Crokes were victorious on a final score-line of 3-10 to 2-11.  What a game! The only pity was that one team had to lose.

Footnote 1: Kilmacud-Crokes go on to meet Ballyboden in the Minor Hurling Championship Final. 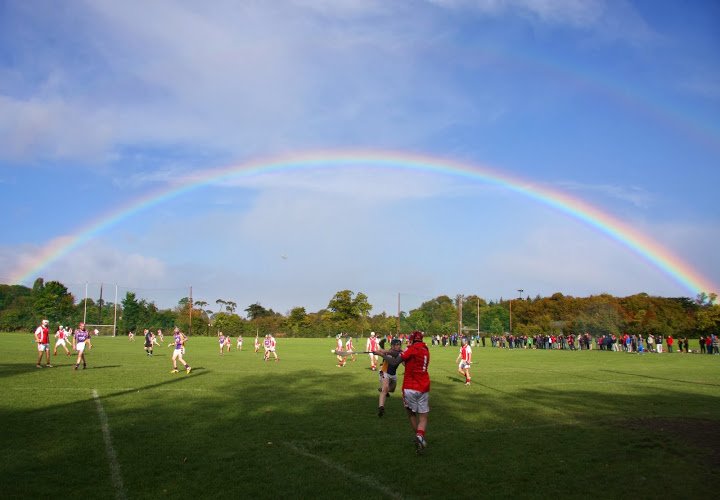