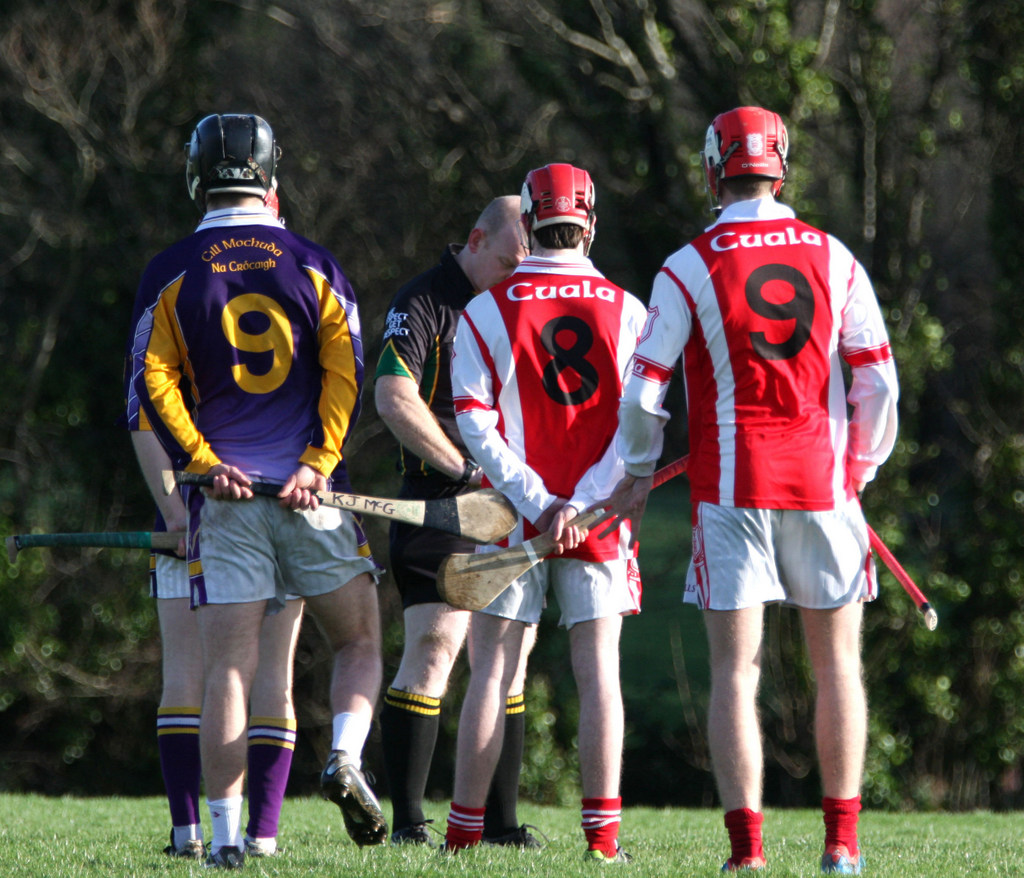 Well Done to our Minor Hurlers who finished off their long season in style by winning the Division 1 League Title on Sunday.  This League Final was played in artic conditions in Shankill but this did not hamper our players who put in a storming performance to beat Kilmacud Crokes 0-10 to 0-07.   The lads were in control for most of the game and lead by 1 point at half time playing against a strong wind.  In the dying minutes of the game Kilmacud  did everything possible to get a goal to bring the game to extra time but the Cuala defense could not be breached.  This was a fitting result for this great bunch of players who have worked hard all year.  Now the 94’s  on the team move on to the Adult’s and 95’s players get to do it all over again this year when they combine with the 96’s!! See Pictures

The report below appeared in the Evening Herald on the 29th Jan 13.

Cuala mud-larks clean up in final

Cuala coped better with difficult conditions to take the 2012 Dublin minor hurling league crown, coming out on the right side of a war of attrition with neighbours Kilmacud Crokes at Shankill on Sunday morning.

After the few days of heavy rain, the pitch was naturally very heavy while an at-times gale-force wind ensured that free-flowing hurling was never going to be on the menu.

But credit to both teams for showing a spirit and a passion that made this game entertaining nonetheless.

The celebrations of the Cuala boys at the end of the 60-minute slog proved that this was far removed from your average mid-January runaround.

Crokes started with intent. A free from Mark O’Loughlin, followed by a fine score off the hurl of Seán Keating, gave them an early cushion.

Jack Phelan got the ball rolling at the other end for the Dalkey men, who were playing into the breeze in the opening period. Colm Cronin then restored parity after a fine run.

Indeed, Cronin’s pace was a major factor in ensuring that the silverware will reside in Hyde Park for the coming year. He created endless problems for the opposition with his direct style, while he also offered an outlet at various times of the game when his defence was under pressure.

Although O’Loughlin struck from a dead-ball on 10 minutes to restore Crokes’ lead, the winners squandered the game’s best goal opportunity in the resultant passage of play.

Seán Treacy made the opening for Ruaidrí &Oacute; Giolláin, but the full-forward was denied by a brilliant piece of defending from Dave Corish. The sliotar eventually found its way back to Phelan, though, and he split the posts from close range.

Treacy put his team in front for the first time entering the final 10 minutes of the half.

But O’Loughlin and Dara &Oacute; Gallachóir responded to swing the advantage back in Crokes’ favour.

It would be the last score from play for the Stillorgan men, however, a testament to the gritty resolve of the Cuala rearguard.

Cronin scored his second after another incisive solo run, and there was still time for Cillain Sheanon to give Cuala a 0-6 to 0-5 interval lead as he took advantage of superb work by Andrew Murphy.

The second period started perfectly for the Dalkey men. Four points on the bounce put them ahead on double scores approaching the final quarter, and the deficit represented a considerable hill for Crokes to climb.

Two of those came from Treacy frees that sandwiched well-taken scores from Sheanon and Murphy, the latter once more set up by the tireless Cronin.

Crokes, though, were never going to surrender and followed up on their proud tradition by battling right down to the final second.

O’Loughlin clipped over a brace of frees to close the gap to three. They needed a goal, however, but with the likes of Kevin Killion and Ross Tierney creating a formidable wall in front of ‘keeper Seán Brennan, it never looked on.

Cuala held on to take a deserved title.

Another computer course on offer from SSIP
Scroll to top