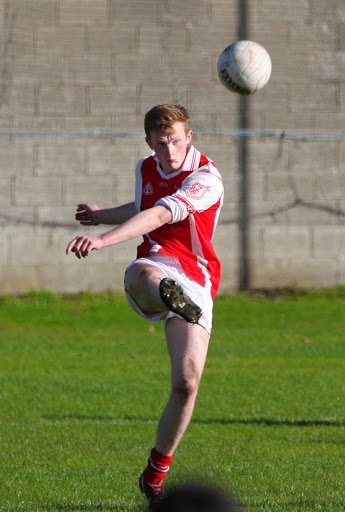 MINOR FOOTBALL ‘A’ CHAMPIONSHIP SEMI-FINAL, SUNDAY 3RD NOVEMBER, O’TOOLE PARK
CUALA 1-8; BALLYBODEN ST. ENDAS 0-9
Bright sunshine and a large crowd greeted both teams as they came out to face each other in the semi-final of the ‘A’ Football championship in O’Toole Park on Sunday 3rd November 2013. Boden were strong favourites to progress as they had easily beaten Cuala in their earlier League encounter. Cuala elected to play down the hill and had the strength of the wind at their back in the opening half. Ballyboden played a sweeper around the middle.
Within in a minute of the start Boden’s dominance around mid-field and some slick passing up-front opened up the Cuala defence. One-on-one with the keeper, the Boden forward decided a point was more valuable at that early stage of the game. Little did anyone know that the next chance Boden would have of a goal would be one minute into injury time at the death! The physicality of the Boden players in the tackle was unsettling the Dalkeymen. But Cuala settled and got to grips with the movement and speed of the Ballyboden attack. Their defence began to close like a clam. Cahalane took a ball on his own 50m line, passed it to Lane who sent a long ball into the oncoming full-forward. O’Sullivan took the pass, transferred it quickly to Treacy who was running off his shoulder on the right. He outflanked the defence and deftly struck the ball low into the corner of the net. Cuala were on the score-board and up and running. Ballyboden were dominant at midfield and won a lot of possession there, but the transfer to their inside forward line was continually interrupted by the Cuala half-backs. Cahalane, Drummond and Byrne played out of their skins and succeeded in frustrating the Boden flow. Boden had far more of the ball in the opening half but couldn’t find their range up front and missed a few gettable frees. Cuala were living on the edge. Kick-out after kick-out was grabbed by a blue-and-white jersey and most in the huge crowd felt it was only a matter of time before the dam burst! But it didn’t happen. Malone, McDermott and Killion at the back took everything that was thrown at them but the free count was high. Cuala, when they did manage to get possession, were more efficient and found Treacy, O’Sullivan and O’Callaghan who were doing more damage up front with less ball. Cuala were guilty of over-indulgence in holding on to the ball around the middle and allowing Boden’s defence close the door on good runs being made by the inside forwards. Half-time score 1-05 to 0-6, Boden would have the benefit of the elements in the second period.
Cuala came out of the half-time huddle with more passion and intensity. They had a game plan to break the ball around mid-field, to win the loose possession and move quick ball inside. Their backs were now taking a strangle-hold on proceedings. Killion and Drummond in the spine began to dominate at the back and began soloing out of defence, Drummond at one point went so far up the field that he was in sight of the posts, but the excitement got the better of him! Cahalane and Byrne with Lane as the loose man around the middle were exceptional. Lane, playing at no. 4 ran on to a pass in front of goal but, like Drummond, the lack of oxygen got the better of him, and the ball ended up in the golf-course! Seán Dowling and Conor Murphy got to grips in mid-field. Cillian Sheanan and Andrew Murphy took points from play as the game opened up. Jack Behan was patrolling down the right flank, linking up well with Treacy and O’Callaghan and drawing frees. Seán O’Bráináin, on for the second half, scored a peach from out on the right. The score-board was clicking up for Cuala, but Boden couldn’t buy a score. They were held scoreless for 20 critical minutes as Cuala took the fight up the field to them. Niall James came on for Andrew Murphy. Eventually with time critical and defeat staring them in the face, the Ballyboden players began to find holes. The intensity of the battle was taking its toll. O’Bráináin was sent for an early shower. Boden’s frustration was palpable and the corner forward joined him. With Cuala up by a goal, everyone was now camped down at the road-end. A loose ball was kicked on the ground through a ruck of players. From no-where, Malone dived to his left and saved a certain goal. The referee played on. The whistles on the line could be heard in Dalkey. Boden won yet another ball in mid-field and raced goal-ward. Now deep into injury time, they needed a goal to bring the game to extra time. The shot from 25m sailed over the bar. Still the game went on. Boden won the kick out but couldn’t find a way through. Kevin Killion was fouled as he came out and the referee called a halt to proceedings. Cuala go on to meet near-neighbours Kilmacud-Crokes in the final on a score-line of 1-8 to 0-9. Phew, what a game!

Next up: Final of the Minor Football Championship against Kilmacud-Crokes scheduled for Sunday 17th November, time and location to be decided. Crokes came through the challenge of Ballinteer St. John’s in the game that followed.