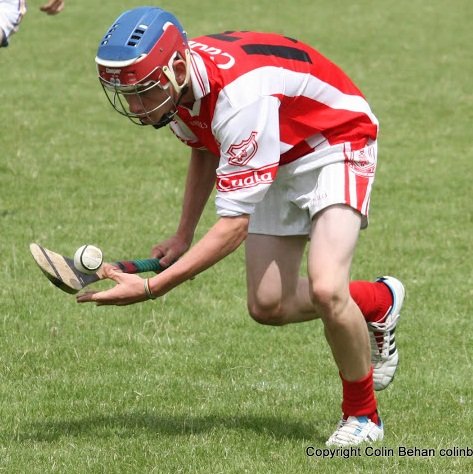 MINOR HURLING “C” CHAMPIONSHIP SUNDAY 13th OCTOBER, ST.  SHANKILL
CUALA 3 -10; NA FIANNA 2-03
In an early throw-in in the Minor Hurling Championship in perfect hurling conditions in Shankill, Cuala Minor B’s faced a Na Fianna team with a 100% league and championship record this year. “Work Rate” was the bye-word as Cuala had surrendered a 6 point lead in their last match to lose narrowly against O’Tooles. In a “must win” game (we needed a minimum 4 point margin to ensure qualification ) in front of an enthusiastic Cuala support the lads prevailed by 3-10 to 2-3 in what was a physical and tense encounter which threatened to boil over at times.
19 players played their part in a performance of great character. Rory De Stanlaigh was masterful in nets, making a fine point blank save and marshalling his defence well. This was an excellent performance from our backs as the final score suggests. The two Karls were solid at wing Back with the excellent Mattie Higgins once again ably playing a Captain’s part in front off a dominant Cian Mac Cearbhaill, Liam Boland and the outstanding Jack Lahert. Subs Ronan O Gralaigh and Conal Molumphy also ably maintained  the consistently tight  defensive effort in the second half.  With David Ryan, Justin Byrne and Sean Gibney rotating the defensive midfield duties there was no way through for a hard working Na Fianna attack, with Ryan putting in a brilliant sweeping performance in the last 20 minutes.
The Cuala work rate up front was second to none and we got off to a perfect start with a Cillian Bass goal after some hard grafting by Fiontan Poirtéir.  Justin Byrne gave a brilliant hurling performance but will be especially remembered for his massive honest effort as he exhausted himself for the Cuala cause. David Ryan continues his impeccable free taking record with some great long distance frees. A Conor Perry goal before half time left Cuala leading 2-07 to 1-02 at half time with Na Fianna managing just one goal from play against that resolute Cuala defense in the first period. Sean Gibney was unlucky to have  an excellent goal ruled out for over-carrying before half-time.   The second half was a very physical encounter with both defences dominating for long periods making scores difficult to come by. With the tension taking its toll, 10 yellow cards (5 Cuala) were issued as both sides gave their all in a tough encounter. The Cuala backs held their own yielding nothing to a Na Fianna team who never stopped trying to narrow the margin. Great defensive blocks from Ronan and Mattie repelled the Na Fianna forwards and super distribution from David Ryan turned on the supply to the Cuala forward line.  A  great second half goal from Man of the Match Cian Mac Fhearghusa  who worked his socks off throughout sealed the outcome along with impressive points from out the field from Niall O’Callaghan and Sean Gibney. With an impressive spread of 7 scorers in all, the final margin of 10 points means that Cuala top Group C and qualify for a quarter-final.
This was a particularly pleasing result for a team that worked tremendously hard to ensure victory on a day where Cian, Sean, Ronan and Conor played their part on their return to competition after long-term injuries. With Andy Power and Conall O Ceallaigh also making a positive impact,  and with a great array of extra talent on the bench , this panel, which draws from the entire minor section of 95’s, 96’s and 97’s will present plenty of selection dilemmas for the next day.