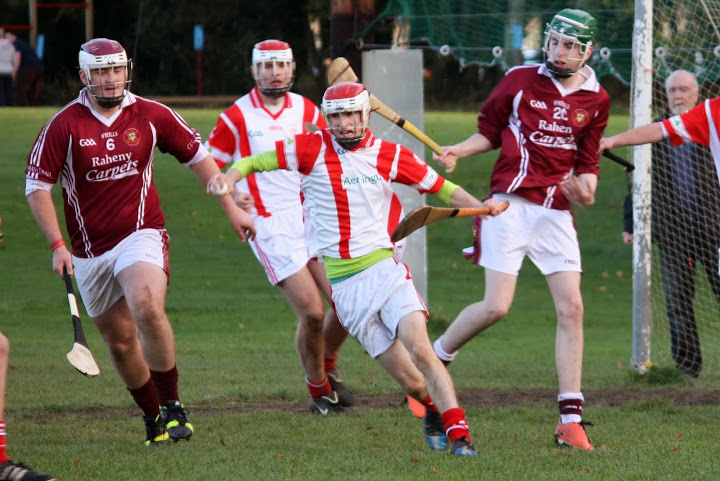 MINOR C HURLING CHAMPIONSHIP QUARTER-FINAL V RAHENY, SUNDAY 10TH NOVEMBER, SHANGANAGH PARK, SHANKILL
CUALA 4-15, RAHENY 4-12
A team performance full of commitment and hard work, and a memorable hat-trick from man-of-the-match Niall O’Callaghan propelled Cuala’s Minor B hurlers into a semi-final berth against Na Fianna in a fortnight’s time.
A sunny autumnal morning attracted a huge crowd to Shanganagh Park where Cuala took on Raheny in the Minor C Hurling Championship Quarter-final. The game was full of excitement and incident as both teams went at it ‘hammer and tongs’. Cuala clipped over a number of early points and looked in control as they raced into an early lead against the physically stronger Raheny team. Bass slipped in a goal to settle the nerves, O’Callaghan followed up with his first, a ground pull from close range. Cuala led by 9 at that stage and looked to have the classier hurlers. But Raheny weren’t going to go away easily. As they began to move up the gears, Cuala began to lose their shape & discipline. They started to play from behind and, to the obvious frustration of the huge home support, began to give away some handy frees.  The Maroons didn’t spurn the opportunity, grew in confidence and got back into the game. They scored two goals of their own mid-way through the half and took four points without reply just before the break. The red-and-whites on the side-line were now getting more nervous after such a promising start. Half-time score: 2-9 to 2-7 in favour of the Dalkeymen.
The Cuala management used the half-time interval to re-focus the players and re-structure the mid-field area. But arguably, it was the introduction of Big Tom Sheehan at centre-forward that proved to be the turning point. His ability to hold-up ball and frustrate the strong Raheny centre-back was critical. He prevented him driving long deliveries into the heart of the Cuala defence. More ball began to find its way to the deadly 2-man inside line of Bass and O’Callaghan.  Justin Byrne and Eoghan Dorman began to pick up more possession on the half-forward line. Cuala’s half-back line of Karl Wolohan, Mattie Higgins and Karl Schutte now hurled as if their lives depended on it, and David Ryan as sweeper around midfield was outstanding. Seán Gibney and Conall O’Ceallaigh (who replaced the injured Jack Lahert), swept up a lot of loose ball around mid-field and fed their hungry forwards.  One such delivery was taken in the paw by Big Tom and he tried for a point from 40m. As the ball was dropping into the square, the talented O’Callaghan pulled on it in the air and smashed it to the net. A wonder-goal Corbett or Shefflin would have been proud of. This came not long after his  second goal when a Gibney delivery ball flashed across the square from the left and was met perfectly by the 13 to the back of the net. The game was heading in the Cuala direction and Raheny had to build again. They ploughed forward and began to find holes as the game opened up. The pressure was now back on Cuala’s rear-guard where Cian MacCearbhaill, Liam Boland and James McCarthy were now called into action on continuously. The referee’s whistle went into overdrive and Cuala’s lead was back to five. The Goalkeeper pulled of a spectacular penalty save. Cuala dropped two players back to defend, but it left no-one at home around the middle. Raheny began to make hay in the November sunshine! Another foul in front of goal was driven over by the Raheny sharpshooter though he intended to burst the net. Cuala were hanging on by their fingertips, but defended like tigers. Time after time when it looked like Raheny had to score, a defender would get a block in and burst out of defence to clear their lines. But Raheny were queuing up outfield. No sooner had the ball come out, when it was rained back in again. Another Raheny shirt was pulled. This time a 25m free was driven with venom. The defenders held the line and stopped the pile-driver, but the rebound was buried. Cuala were only two ahead with seven on the clock. A goal was badly needed to steady the nerves. O’Callaghan again answered the call. He latched on to Sheehan’s ball flashing across the Raheny full-back line and buried his third goal. The relief on the side-line was palpable. But still the clock rolled on. Half of Dalkey were pointing to their wrists. Raheny attacked again. They were trying for goals, but time was not their friend!  Cuala’s determination and never-say-die attitude won out. The referee called time on a score-line of 4-15 to 4-12. A wonderful achievement from a very committed bunch of lads…and a severely stressed management team!

Match Photos: HERE
Footnote 1: You cannot but admire the 29 players on this panel who have shown huge commitment and great effort to get this team to the semi-final. It will be a difficult task to pick 15 from this group to start the next day out. Hopefully all of them will experience the enjoyment of getting to a Championship Final.
Footnote 2: Skerries beat Boden 3-8 to 1-11 in the first semi-final, so they wait for the winners of the Cuala v Na Fianna encounter. Cuala narrowly beat Skerries in the League and accounted for Na Fianna in the round-robin stages of the Championship…but as Mick Grealy advised his panel after the game, that’s now history!
Cuala Management Team: Michael Grealy, Declan Schutte, with Brendan Stanley in the back-room.
Next up: Cuala play the Championship semi-final on Sunday 24th November against Na Fianna (venue expected to be Shanganagh Park, but has to be confirmed).
Panel: Ruairi Stanley (Ryan De Felice, 40 mins), Cian Mac Cearrbháill, Liam Boland, Karl Schutte, Karl Wolohan, Matthew Higgins, Jack Lahart (inj. 30 mins), Sean Gibney, David Ryan (0-4, 2 frees), Justin Byrne (0-2), Cian Ferguson, Eoghan Dorman, Niall O’Callaghan (3-6, 5 frees), Cillian Bass (1-2), Tom Sheehan (on for Ferguson 35 mins), Conor Perry (on for McCarthy 30 mins), Ryan di Felice, Conall O’Ceallaigh (on for Lahert 30 mins), Seamas McCarthy, Fintan Porteir, Dara O’Colpa, Eoin Brennan, Conall Molumphy (on for Dorman 50 mins), Andrew de Paor, Adam O’Meachair, Sean Maas, Cillian Greene, Oisin Mac Anna (inj.), Ronán O’Gralaigh (inj.)