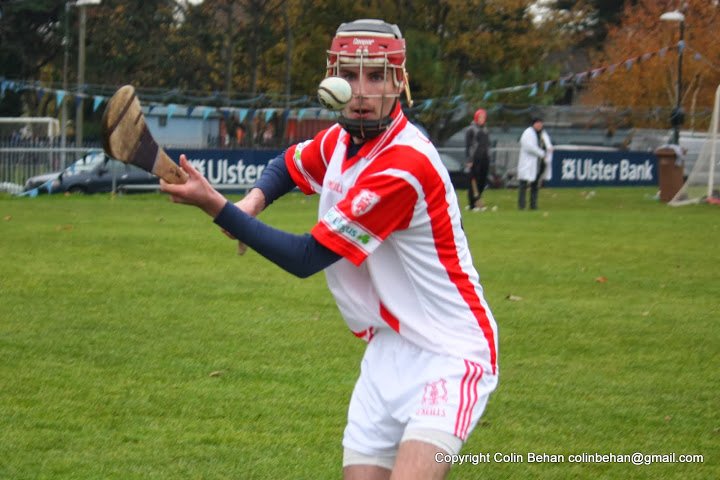 MINOR HURLING “C” CHAMPIONSHIP SEMI-FINAL, SUNDAY 24th NOVEMBER, ST.MOIBHI RD.
CUALA 2-0; NA FIANNA 1-09
“When it’s not always raining, there’ll be days like this…” the words of Van Morrison’s song were never so vividly felt as in St. Moibhi Road on Sunday 24th November as Cuala’s second Minor hurling team took on Na Fianna in the C Championship semi-final. Everything fell into place for the Northsiders, and everything they touched turned to gold.
Early in the game they found top gear and it seemed as if there was nothing the Dalkeymen could do to knock them back. Four points were registered by the Glasnevin outfit in as many minutes. Cuala were slow out of the blocks and looked strangely lethargic and ponderous. Suddenly, on 10 minutes, Cuala found their true form and their half-backs and mid-fielders began to drive forward. A free on the right and Ryan hit an exocet sky-ward. It had ‘goal’ written all over it. Like windmills every Cuala forward pulled on the ball in the air. There was nothing the Na Fianna keeper could to such was the power of the assault, except pick the sliothar out of the back of his own net. Cuala were back in the game 1-0 to 0-4. Higgins was leading from the no. 6 berth and Mac Fheargusa and Ryan were tireless in the middle. Gibney showed real touches of class at 11.  But Na Fianna were not about to lie down. They moved quickly up field. Their touch and accuracy were causing problems for the Cualamen and they drew frees. The Fianna sharp-shooter was in form. Cuala were clinically punished and order was restored. Cuala’s defence was as solid as a rock, Wolohan and Schutte were strong on the wings and Dara O’Colpa, Cian Mac Cearbháill, Cillian Greene were holding their own at the back. But the ball was returning too quickly. Stanley in nets was getting busier. On 20 minutes he made his first brilliant save. Na Fianna were quicker now to the loose ball and were regularly advancing on the Cuala goal, he dived full-length to his right and kept them as bay. The save drew applause from both lines. No sooner was the ball pucked out when another long-ranger was on its way in. Everyone missed the flight of it, but Stano knew what he was about. He calmly took the catch and moved off his line to his left. But the Na Fianna full-forward upended him and the ball broke free. The silence was deafening. We waited for a whistle that never came. A sharp ground-pull saw the Cuala net rattle – the blue-and-golds had eventually breached the Cuala defence.
The Cuala troops massed in at the interval, and came out a different side after the break. A goal was needed to get them back into it. Suddenly, now it was Cuala who were in the ascendency and Na Fianna were pulling them down. 9 frees were awarded but unfortunately for the red-and-whites, none were taken – they were all just that little bit too far out! The balls that dropped short were mopped up by the Na Fianna defence, and cleared smartly. Nothing it seemed would go right for Cuala today. When a ball came out of a ruck or was cleared badly, it always seemed to fall to a Glasnevin man.  Cuala tried to get possession up front but were met with a wall of aggression. The pressure was savage. Shots that went over last week, were going wide left and right today. The injury list had some notable signatories. Eventually Cuala got the break-through. Gibney, Perry and Byrne combined well and a ball from out on the left found Fiontáin Portéir in space in front of goal. He dispatched it beautifully, but time was running out. Bucko, Na Fianna’s classy left-half-forward, had been annoyingly good all day. He took two nice points to settle the nerves close to the death. Cuala gave everything they had, but nothing was going for them. One of those games to forget. There will be better days for this wonderfully committed team. Na Fianna advance to the final on a score-line of 2-0 to 1-9, Cuala would rue the 17 chances that went a-begging. Stanley between the sticks, Mac Fheargusa, Gibney, and Byrne, were excellent. Wolohan, Schutte, Higgins, O’Colpa and Mac Cearrbháill all played very well for the Reds