It was Heartbreak Hotel for Cuala’s Minor B hurlers when a deflected goal in the 60 minute killed their chance of going top of the League table. Cuala scored eighteen times to their opponents thirteen, but goals win matches, and so it was that Rialto Gaels went back down the canal with two points firmly in their back pocket. Cuala had opened up a comfortable 0-5 to 0-2 lead on ten minutes when the first goal arrived to level the game and give the Dolphin’s Barn outfit a much needed boost. Cuala pulled away again with fine strikes from Conal Molumby and the ever-accurate free-taker Seán Maas. But a second goal came just on half-time. A high delivery came off the high upright and fell into the hand of the Rialto corner-forward who kicked it to the net. Cuala down 0-7 to 2-5 at the break.

Cuala upped the effort in the second period and Big Tom Sheehan showed how good a player he is. He took most of the punishment and won most of the frees at centre-forward. Tiarnán Lane and Seán Maas were outstanding in the middle and Brian Coronella was very solid at the centre of the defence. Fionn O’Drisceoil and Emmet Murphy took good points and the game was moving in Cuala’s direction. With ten on the clock, Cuala were leading 0-15 to 2-7 but their forwards spurned too many chances and the Rialto goalkeeper was in inspired form. A Rialto free 45 meters out on the left was mis-hit and found its way passed a glut of players into the net. Cuala responded. Ryan Di Felice hit a monster over from 80 metres out. Seán Maas went on a solo run down the left but his shot was just wide. Gary Moran broke the deadlock with a goal and Cuala looked like they might pull away again with 5 minutes to play, 1-15 to 3-8. But the Rialto lads were made of sterner stuff.  Another long-range missile landed into the back of the Cuala net, this time from a ‘65. Maas hit another free over the bar to leave the minimum between the teams. But time was against the Reds. With two minutes left on the clock, Rialto were awarded a dubious free which was sent out to the right. Rialto’s no.8 and best player took it and went low from fully 35m out. The bullet deflected off the full-forward and left Di Felice with no chance. Di Felice tried to lob one in for a final desperate goal, but he ball dropped over. The final score on a frustrating evening for Cuala’s Minor B hurlers, was 1-17 to 5-8. Cuala’s Man-of-the–Match was Tom Sheehan.

Footnote: Cuala with 5 games played have 7 points and stay second to Castleknock with 8 points, but crucially Cuala have a game in hand. Kilmacud lie third on 6 points. 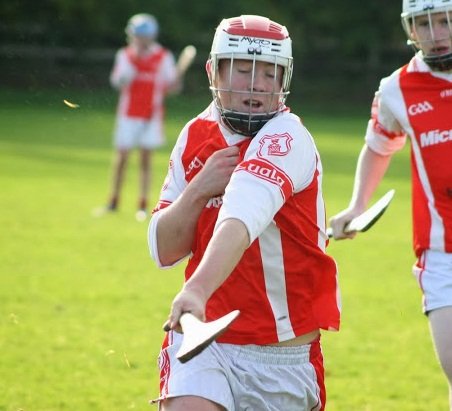