In perfect conditions, Cuala and Crokes could not be separated in this enthralling game where goal chances abounded at both ends. There was never more than a puck of the ball between the sides at any stage. Cuala played with more physicality and energy, but Crokes responded with a performance of subtlety and teamwork and deftly used their possession to find teammates in better positions.

Con O’Callaghan opened with two trademark ‘over the shoulder’ points, but Crokes responded with a free and a ’65 following a save by Seán O’Bráináin in nets at the Cemetery end. Seán Treacy began to flex himself and by the close of the first quarter had taken three points. Donal Lane who played his heart out in mid-field for the Red & Whites, hit an opportunist point to leave the Dalkeymen two up. The twin axis of Treacy & O’Callaghan up front was beginning to dominate proceedings and both players were probing for an opening goal. When O’Callaghan eventually broke through the cover, you would have put your house on him to find the net. However the Crokes keeper sprinted off his line and smothered the shot. Treacy converted the resulting ’65. Cuala continued to apply the pressure but Crokes put an extra player in front of their full-back line to cut off supply to Cuala’s lethal inside line. On the half-hour, while everyone was thinking about taking a break from the sweltering heat, Crokes struck a wonder-goal. Following a breakdown of a Cuala attack, Dara O’Gallchobhair the Crokes mid-fielder latched onto the sliotar on his own ’21 and raced 50m through the centre of the Cuala defence. Drawing the defenders, he threw a pass inside to the Crokes centre-forward Mark O’Laughlin who dispatched a thunderous strike to the top right-hand corner of the net. The keeper had no chance. The referee called for the ball, and the teams swapped ends on parity, 0-9 to 1-6. Despite their dominance, Cuala had to begin to climb the mountain again!

David Ryan was introduced for Behan who was not able to continue after the break. Cuala upped the ante and within a minute Treacy hit a long range free for the Reds. Seven minutes in, Treacy hit another lovely point from out on the left and it looked like Cuala were about to pull away. But Crokes hadn’t read the script! O’Laughlin was deadly from the placed ball and punished every Cuala indiscretion. Kilmacud began to win more ball around the middle and hit two quick wides in succession. The pressure was mounting. A speculative ball into the Cuala square was batted back into the danger area by O’Bráináin and the ball was despatched to the Cuala net. Cuala were back to the ‘drawing-board’ and had to pick up the pieces again! More confusion in Cuala’s back-yard saw the sliothar flash wide across the open goal with no-one at home. Cuala steadied.  On 40 minutes, Donal Lane picked off his second point for Cuala and the lead was back to the minimum 0-12 to 2-7. Andrew Murphy swopped points with O’Gallchobhair and with 15 to go, O’Callaghan raced onto a loose ball. He charged towards the Crokes goal and unleashed a strike that whizzed past the right-hand upright inches wide! The Crokes defence emitted a collective sigh of relief. Behan stepped forward and showed real commitment by asking to be brought back into the game. He was re-introduced to the attack and Cuala began to dominate possession again. Points from O’Callaghan, Treacy and a huge long-range effort from Sheanan who was now playing as a sweeper, pushed them back into a 2 point lead with 4 minutes on the clock. But Crokes wouldn’t lie down. O’Gallchobhair who was the outstanding player for the Kilmacud side, swooped on a ball and ran at the heart of the Cuala defence. A goal at that moment would have been decisive. Treacy came across from the right and unceremoniously took him down 30m out. The ref flashed a yellow and the free sailed over the bar – Cuala now up by the minimum! Moments later, another yellow was flashed at Ciarán Tierney for upending Seán Keating and the resulting point levelled matters for the last time. Final score: 0-16 to 2-10.

Next up: Cuala now sit proudly on top of Division 1 with all of their games played, but must face the team in second position in a play-off to decide who will officially take League honours. 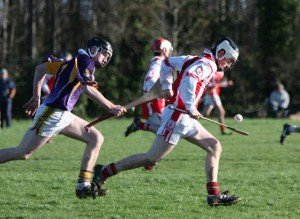 Calling all Cuala Fans now is your chance to meet BOB!
Scroll to top