Everyone who has dealings with the ’00 Juvenile Boys Team will be shocked and saddened to learn of the untimely death of Mick McClure who passed away peacefully on Saturday evening.  Mick was a mentor of the ’00 Boys team since their early days in the Academy and he will be sadly missed by the whole team, mentors and parents.  We express our deepest sympathy to Mick’s son Conor who plays on the 00’s, his wife Mary and son’s Eoin and Tom.  Mick’s funeral is on Tuesday at 11am in Our Ladies of Victories Church in Sallynoggin.  Ar dheis Dé go raibh ainm

A few words from Donal

Mick was an integral part of our coaching/mentor group since our early days in the Academy. He was loyal and committed and had a lovely relaxed, yet firm, approach to dealing with the lads in the group. Their fondness for him was reflected in their response to his passing and their respectful and dignified presence at the funeral in large numbers. Whilst Mick would admit that, like the rest of us, his patience was often tested by looking after up to 50 active(!) lads, he would never let this impact his demeanour with the lads which remained friendly, yet firm and fair. Every one of our players, from the strongest to a beginner, benefitted from Mick’s words of encouragement and calm guidance.
Mick was an ever present at training and matches prior to his illness – a more reliable mentor one could not find. We always knew that if there was a job to be done, Mick would not let you down. This was probably best reflected during the two years we sold Christmas trees at Hyde Road – Mick spent hours providing a free delivery service in his trusty van.
Indeed, speaking of his distinctive van, its many the convoy of 2000s players and parents that only made it round the M50 to a far flung pitch due to the presence of Mick’s van …. put Mick somewhere in the middle and you’d know from the front that, even if you couldnt see the back of the convoy, they’d see Mick’s van alright!
Mick was also very popular with the other members of the coaching team – his dry wit and brilliantly cutting sense of humour lightened plenty mentors meetings. And when we had the opportunity to have a few drinks to mark the end of a season or Christmas or another Mini All Ireland, no better man than Mick to ensure the craic and banter was maintained into the early hours.
One of my own favourite memories was the morning of our snowy hike on Killiney Hill – a few of us ‘regulars’ cleverly arranged the event such that we had a free half hour for a coffee – sitting in the snow, with Mick recounting various stories from his youth around Killiney, is a memory that those of us lucky enough to have been there that morning will treasure – the pictures attached, taken by Peadar, tell a thousand words!
As I write this on the evening of Mick’s funeral, with the wind blowing and the sleet falling, it reminds me of a phone conversation Mick and I would have had on more than one wet, cold or windy Tuesday or Thursday before a session in Loreto. Mick would ring me, sitting in the comfort of the office, to ask me, the ‘pen pusher’, what did I think … would we go ahead with training or not? I would squint out through the window and suggest… “sure we’ll go ahead, it doesn’t look too bad”… To which Mick, the landscape gardener, would reply “you’d know you havent been out in it all bleedin’ day”! 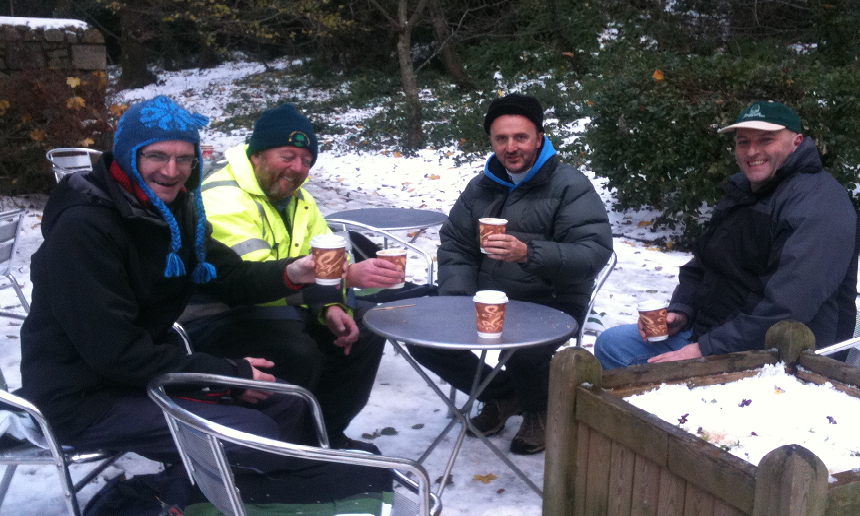