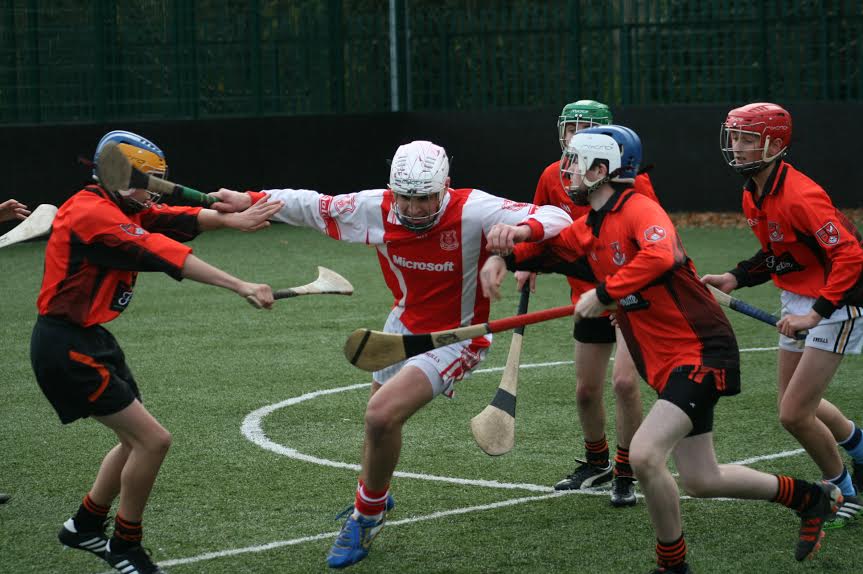 Cuala’s U16 hurlers hosted the Mick Holden Perpetual Hurling Tournament over the December/January period in Loughlinstown Leisure Centre. The Tournament was run over a period of 8 Sunday mornings either side of Christmas.
The Tournament featured ten 7-a-side teams from the Wicklow Development squad, Fingallians, Ballinteer St John’s, Naas and St. Sylvesters and by any measure was an outstanding success. The Tournament will now become a feature of the hurling calendar every year, with the Cup being passed on from one age-group to the next.
Nicknamed ‘cage-fighting’ by some of the more colourful Cuala participants, matches are played on a fully enclosed astro-turf pitch 35mx35m. The ball never goes out of play, and that, in combination with 14 players crammed into the small space, leads to a match of very high physical intensity, with a high scoring average. Lack of time on the ball and the close robustness of the tackles puts a premium on fast, decisive hurling and short, accurate passing.
The aim of the tournament is to increase the pace and speed of hurling for the participants and to build up their resilience and ability in the tackle.
It was interesting to watch the rapid improvement in the teams as they become more used to the speed and pace of the game. It is a great way to keep the players hurling when pitches are closed due to inclement weather.
Fingallians took the honours this year, beating a very strong Naas team in the final.
Congratulations to Finbarr Murphy for organizing and managing this wonderful initiative!