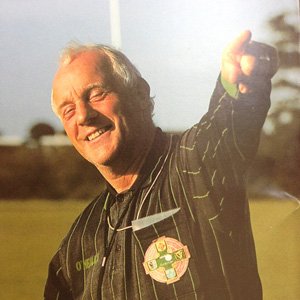 Martin Lawlor, the noted hurling referee, and formerly of Cabinteely GAA Club, passed away peacefully last Friday after a short illness. Martin was a great friend to many in Cuala both on and off the field and had refereed many Cuala matches up until recent years. He won Junior Hurling Championships with Cabinteely and also won an All Ireland Medal representing the Dublin over 40’s Hurling team.  Everyone in Cuala knew Martin as an absolute gentleman who always had a smile & a kind word for us all. He will be sadly missed.

A little story from one of his former team-mates epitomizes the kind-hearted man Martin was:

“Martin was refereeing a Cuala Intermediate Hurling match and a former team mate of Martin’s was being booked for a wild tackle.  Martin was in the process of showing the Cuala man a red card. Taking out his notebook, he asked for the player’s name to which the reply came ‘Gerald Armstrong’.  Recognizing his old comrade-in-arms, Martin immediately replied ‘ah Gerald I’m sorry, I didn’t know it was you’ and then waved play on”.