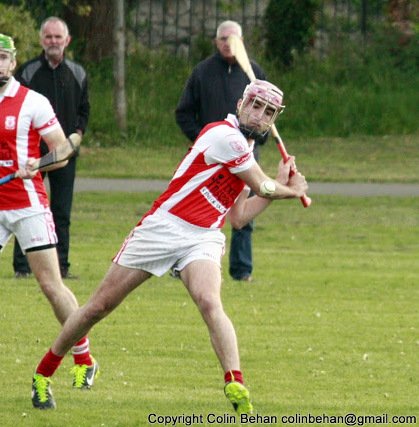 And the Thunder rolled…..In heavy, sultry conditions, Cuala’s Senior hurlers took the points right at the death in this pulsating and tempestuous game. In truth Craobh Chiaráin’s fiercely determined, aggressive performance deserved something from the game. They led from start to finish, but two lightning strikes in the space of 30 seconds inspired by man-of-the-match Scott O’Brien, won the game for the Dalkeymen right at the death.

Chiaráins opened, as they always do, at a very high tempo and drove at the Cuala defence at every opportunity. Their style of forceful, hard-hitting play knocked Cuala back and they raced into a strong lead. Under intense pressure all over the place, Cuala’s touch and control deserted them in the initial 20 minutes of the game and Craobh were winning most of the ‘dirty ball’. To add to the difficulty, with a slight breeze at his back, Dublin net-minder, Stephen Chester, was dropping his puck-outs onto the Cuala full-back line at the Castle end and causing terrible hardship for the defenders. From one of these ‘scud missiles’, Francis Usanga tore through on a solo run and finished brilliantly to the top corner of the net. Hetherton, O’Reilly, Farrell and Kelly were dominating at the back but as the game progressed, Cuala began to settle. A move down the right saw Kyle Braine burst through until he was clear on goal. With a man on his left, he took his chances and drove the shot low, but you need something special to beat Stephen Chester. The ball was cleared. Cuala were now getting on more ball as they increased their level of intensity but dropped four balls short that should have been converted. Half-time score 1-9 to 0-7 in favour of the Northsiders.

In the second period, the high level of intensity began to drain the energy of the 15 Donnycarney men and gaps began to appear. It was now point for point but Craobh continued to keep their 5 point cushion. Cuala’s half back line of O’Brien, Browne and Stapleton were now dominating and there was a more plentiful supply of ball. Chiarains had to resort to fouling and Treacy and Connolly were converting. With only a few minutes left, and Chiaráins visibly tiring, Cuala Management sensed an opportunity. Chiaráins for the first time in the game began to back off and protect their lead. Cuala threw Seán Moran and Seán Treacy deeper into the attack and urged their midfielders forward. With 2 minutes on the clock, and Cuala 3 points in arrears, Scott O’Brien took a ball around the middle and drove forward at pace. He bravely took on the Craobh defenders, threw a pass to Colum Sheanan, continued his run, received the return pass and, despite being hit by half of Donnycarney, he crashed the thunder-strike to the top right hand corner of the net from 25m. Almost immediately from the puck-out, O’Brien was on his bike again. He again drew the cover, but this time threw a pass to Treacy on the left. He took the ball on his stick and, in one motion, deftly flicked it over his head to Kyle Braine who he knew was un-marked in the corner. Braine caught the ball and threw a pass inside to Cian Waldron who was charging through the cover. He took it clean and struck a pile-driver passed Stephen Chester to the net. On an evening where thunder was threatening everywhere, Cuala had produced two lighting strikes of their own and amazingly were now three points up with nothing left on the clock. Chiaráins were fuming. They were watching a game they had dominated for long periods ebbing away. They reacted as you would expect. They charged forward for what had to be the last attack of the game. Cuala closed ranks and gave away a free on the left, 30m out. Emotions were high and tempers were frayed. Cuala contested the decision. The free was brought forward and to the centre. It was now within goal-scoring range. The artillery was brought up. Cuala piled everyone onto the line as Dave Conway gave instructions on the new rule. The free was struck, the ball was blocked but spun upwards into the air above the heads of the mass of defenders on the line. It came back out and was dispatched for a ’65. Chiaráins were adamant it had crossed the line. The argument was heated and a mêlée ensued. It was a battlefield. Helmets and hurls were scattered everywhere. Some sort of calm was eventually restored. Now 7 minutes into extra time, Craobh had one more shot at the title. Everyone was now down at the Cemetery end, including most of the supporters! The ball was struck, but it had too much on it and, with windmills flaying trying to make contact, it fell right and wide of the posts. Dave Conway blew up an enthralling match on a final score line of 2-15 to 1-15. The battle now over, the players sportingly shook hands knowing there will be more interesting days to come later in the summer.