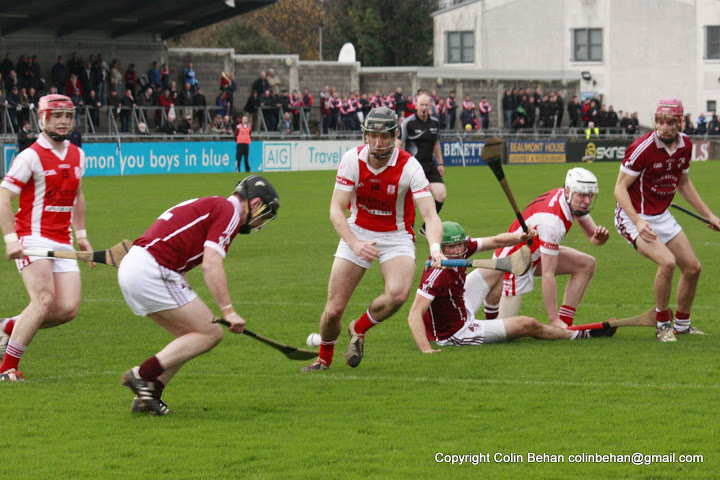 Cuala Senior hurlers took another massive step last Sunday when they defeated Kilkenny Champions Clara in a tense affair in Parnell Park. The game started in a cagey fashion with both sides exchanging frees and not much to separate the sides until about mid-way into the first half. Then Cuala really hit their stride with good points from David Treacy, Jake Malone, Darragh O’Connell and a glorious goal taken by Colm Cronin after great approach work by Mark Schutte. Mark was again to the fore in the 29th minute of the half, when he took on his marker and hit a rasper underneath the crossbar. The unfortunate keeper saved but the ball fell to the ever-alert Sean Treacy who made no mistake in sweeping the breaking ball to the net. Half-time score 2-8 to 0-10 points.

The second half began and within 20 seconds Cuala had another goal – this time a long-range shot from the rampaging Colm Cronin, gloriously guided to the net one-handed by Mark Schutte at the back post. It was as good as a Federer serve and volley , so deft was the touch. Clara to their credit worked extremely hard ,and, mostly through frees, inched within 2 points.The impressive Chris Bulger was beginning to make an impact , at one point showing his pace, split the Cuala defense and had the final pass to the unmarked Conor O’Shea stuck it could have been a different result. However, the defensive unit of Cian O’Callaghan, Simon Timlin and Ross Tierney were magnificent, competing ferociously for every ball and the danger was averted. But frees were a continuous source of contention for Cuala.

In fact Cuala could not seem to win a free from an official at this point of the game.  When Clara were awarded a 13 meter free for an alleged trip, the Clara man had clearly got his own legs tangled,  the whole of Dublin’s  Hurling nerves were on edge. The Clara free-taker elected to take the point and still a 2-point game.

At this point, other teams would have grown doubts in the dark recesses of the mind. But this is a different Cuala team. Cuala had struggled to get a score for 10 minutes when young Jake Malone landed a beaut from 50 yards. The oncoming Con O’Callaghan replaced the hard-working Colum Sheanon and immediately started to run at Clara and drawing a foul. The unfortunate Clara-man Conor O’Shea was yellow-carded for the second time and was sent to the line. Pointed frees from David Treacy followed and then a final run down the side-line and post splitting point from man-of-the-match Colm Cronin and the day was Cuala’s. Final score 3-12 to 0-17.

Hard luck to Clara  – a fine sporting game and what a result for Cuala and Dublin hurling.