As part of Cuala Football Vision 2017, the Cuala football player welfare initiative was launched in the Clubhouse on Thursday the 5th of June.

The evening kicked off to a good start with a hot après training meal being provided by Brid Sheanon. Brian Mullally player welfare co-ordinator, gave a brief overview of how the player welfare forum would proceed and how it was envisaged that the role would expand and welcomed contributions from players and mentors alike.

There then followed five excellent presentations, followed by a question and answer session.

Mikie Sheanon Football Chairman closed the evening by thanking all the players for attending and gave special thanks to all the presenters who had made the event so worthwhile.

We intend to work on the momentum gained by last nights event, it is intended to update the Web site regularly and most importantly this initiative is there  to support our players in any way we can. 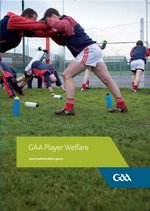