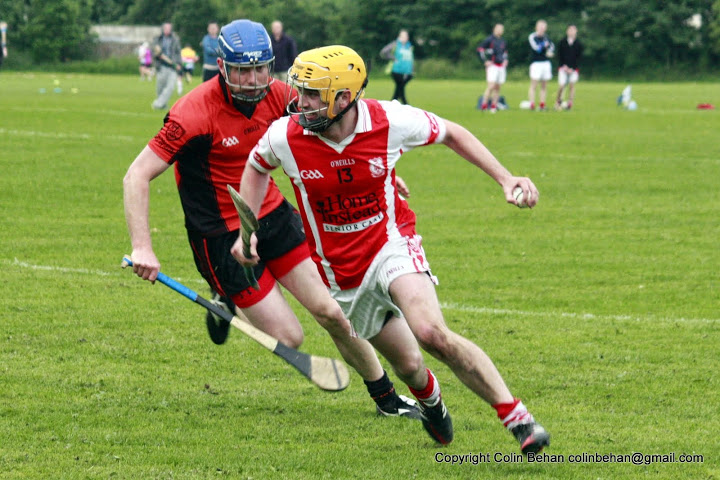 A late, late Cuala surge where Seán O’Bráináin’s 21m free was blasted over the bar, and Barry Connolly ‘s strike hit the bar was just that little bit too late to save the points in this entertaining Senior Hurling League game in Marley Park.

In the first quarter Cuala and Ballinteer were evenly matched with Breathnach, Waldron and Connolly finding their range. St. John’s responded with three points of their own, one a long-range effort from their lively wing-back. Cuala pulled ahead with a Connolly free, but 5 points in succession from the more hungry Ballinteer side gave them the edge coming into the break. Cuala were guilty of 6 wides in that first half, Ballinteer were more economical. Connolly converted three more frees but these were answered by scores from the St. John’s mid-fielders and their ever-dangerous wing-back. Just on the interval, Ballinteer were gifted a goal. A Cuala short puck out was turned over, and the wing-forward burst through to despatch as shot to the Cuala net. The teams went in for the oranges on a score-line of 0-8 to 1-10.

On the re-start, neither side were willing to concede possession easily, and again, the teams were very evenly matched in the third quarter. Stapleton, Butler and Waldron found their range, only for Ballinteer to respond with three points of their own. Cuala eventually got to grips with their Southside neighbours and hit 1-2 in a frantic last quarter to leave two points between the sides. Waldron struck a ground ball to the net and Connolly hit two points from play. But Cuala were now hunting for goals. Breathnach’s physical presence on the edge of the square was causing problems. He won possession and was unceremoniously taken down. Seán O’Bráinain was called up from deep to strike the ensuing 21m free. He struck it high and the ball sailed over for a point. With time running out, Connolly struck the bar with a ‘rasper’ that would have put the visitors up by the minimum. Unfortunately for the Dalkeymen, it rebounded back into play and was cleared. On the whistle, Ballinteer hit the last free to leave the final score 1-18 to 2-12, Ballinteer had won by 3.

Footnote: After five games, Cuala lie in 8th position in the League on 4 points with 4 teams below them; Ballinteer are in 4th position on 6 points.