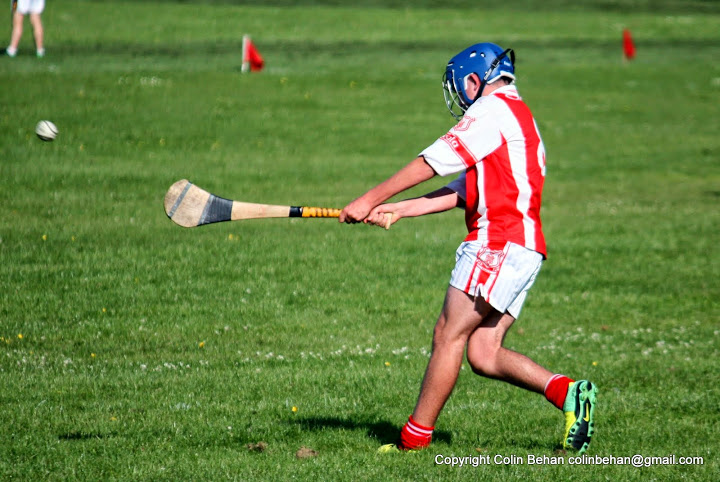 Tiarnán   Lane’s brilliant man-of-the-match performance was not enough to overcome a strong Ballyboden St. Enda’s challenge in this nervy, uncompromising but hugely entertaining Division 1 hurling League game in ShanganaghPark, played in perfect conditions. Lane was responsible for nine of Cuala’s eleven scores and was only inches away from converting a goal on the 25 minute as his thunder-struck shot flew over the bar.

In the first half, the Dalkeymen hooked, blocked and harried all over the pitch. They fought as if their lives depended on it and threw themselves into the fray with abandon. This Cuala team work hard for each other and every one of them know they have to work their socks off to compete at this level. Boden were not allowed get into their stride and, such was the pressure on them, they struggled to move the ball forward and had difficuty clearing their lines. Cuala won a mountain of ball in that first period and were totally in control around the middle and in the half-back line. However, despite an abundance of ball, Cuala’s forwards were well shackled by the accomplished Boden defenders and hard-won possession outfield was not converted into scores. In that first 30 minutes, the Reds just couldn’t buy a score! Joe Mahony at full-forward was proving to be a real hand-full and balls were breaking off him, but either the ball was half-cleared or the Cuala player in possession taken down. Lane had converted four frees by the 20 minute mark. Boden first troubled the scoreboard on 12 minutes. But the game began to open up late in the half. A slick passing move from mid-field involving Fionn O’Drisceoil, Diarmid Maas and Jack Hartnett put Lane clean through. He ghosted past the full-back and was one-on-one with the keeper. His shot for the net from 15m was unfortunately inches too high. The ball buried itself in the back-net. Almost immediately, a quick Cuala delivery from the right flew over the defenders and was pulled on by Emmet Murphy 6m out. He made good contact, but the ball flew agonizingly wide. The Cuala line were holding their heads in frustration. Brian Coronella and his sidekicks in the full-back line, Rory McMahon and Daniel Johnson were hardly troubled and dealt very easily with anything that came through the solid half-back line of James Murphy, Fionn O’Drisceoil and Cormac Quinn. Stevie McDonnell looked like he had been a keeper all his hurling career! By the interval Cuala were in the lead on a ‘football’ score-line of 0-6 to 0-4, a really tight game.

Boden came out of the huddle a different team. They knew that they had ‘got away with murder’ in that first half and the stroll in the sun they thought they might get wasn’t materializing. They had to push themselves harder. They upped their effort and started winning around the middle where Mass and Lane held sway for most of the game. Cuala lost their dominance in the first 10 minutes of the second half and damage was done. The slim 2 point lead became a distant memory within 5 minutes of the start, and worse was to follow. 10 minutes in a misunderstanding in the Cuala half-back line out on the right left the Boden mid-fielder running free at the Cuala defence. His pass inside was knife-like and found the Boden number 10. Despite the whole Cuala defence converging on him, he got his left boot to the ball from 20m out and by a complete fluke, lobbed the keeper and found the net. In such a tight game, a goal can be a turning point and it put Boden ahead for the first time 1-6 to 0-6. But Cuala would not ‘play dead’. They never give up. Almost from the puck-out Jack Hartnett took a catch on the right and split the posts. Lane took another, but Boden responded with two dubious enough frees. The teams were now finely balanced, but Boden had that vital goal in their back-pocket. Cuala pushed forward. It was the introduction of Nessan MacGearailt with ten minutes to go that made the difference. His physical strength and determination made him difficult to handle. Himself and Big Joe up front with Cathal O’Floinn on the right were starting to find holes. A long delivery was dropped by the Blue-and-White keeper and ‘scrum-like’ forced into the net by the two big ‘prop’ forwards. Joe would claim it. Cuala were back battling hard. A Lane free with 3 minutes to go cut the deficit to the minimum. The momentum was back with Cuala, but time was their enemy. A break-away point from the Boden mid-fielder against the play was like a dagger to the Cuala team. Mac Gearailt drove for another ball and took it. He was unceremoniously ‘dumped’ by the Boden 12 who was shown a straight Red. A shomozzel ensued, tempers flared, a free was awarded. 25m out, the game almost in the ashes, O’Drisceoil is called forward. A point isn’t enough. The Boden defenders mass on the goal-line like the Clare team lining up against a Nash free. His shot is good but the forest is impenetrable. The ball is cleared and to add insult to injury the Boden wing-back converts from distance. The game is over. Boden take the points on a scoreline of 1-13 to 1-10. Great entertainment!