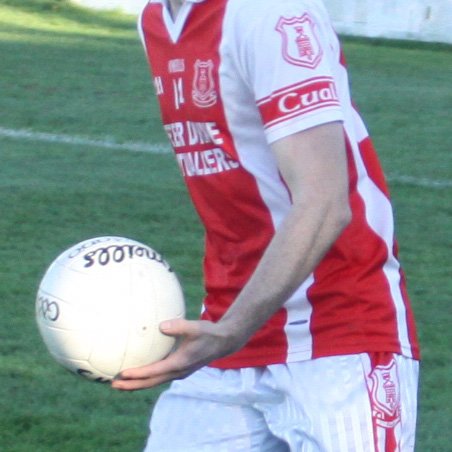 After the success of the Intermediate footballers on Saturday afternoon, it was the turn of the junior footballers on Sunday morning. A beautiful morning welcomed the teams from Cuala and Ballyboughal to O’Toole Park to contest the Junior County D Football final with an 11 O’clock throw in.  A good crowd of supporters made the journey to support the lads despite some sore heads from the celebrations the night before.

The game started brightly and Paul James had two points on the board within two minutes. Ballyboughal scored their only score from play in the 7th minute following a good save from Brian O’Ruairc. Paul James added a third point from play in a move the full length of the pitch before disaster struck. A ball over the top caught our full back line out of position and we had to concede a penalty. No doubt about it.  Their goalkeeper made the long journey to take the kick and duly despatched an unstoppable shot to the net.  However the lads respond and another sweeping resulted in Oisin Mistéil dispatching the ball over the bar. The rest of the half was a very tense and nervous affair before Donal Holohan scored a very good point after good work from Ronan Durkan.  Half time arrived with Cuala ahead by one.

The second half started with Cuala under pressure. However Daragh Lyons intercepted a ball and after some good interchange Paul James rifled a shot at goal that just went over the crossbar. Ballyboughal scored three points from frees to put the north county men in front. However the lead was short lived. Donal Holohan caught a kickout, and after a quick one two with Paul McAdam, kicked a good point himself to bring us back on level terms. With Conor Bennett getting a grip of things at midfield Cuala began to up the tempo. Then came a controversial moment. Cathal O’Giollain was struck in an off the ball incident and the linesman intervene and the Ballyboughal player was sent off. The lads reacted positively and a good move resulted in Paul James scoring a point from a free after Donal Holohan was fouled. We then had three good chances to put the game beyond Ballboughal but were unable to convert the scores. Nervous began to play a part both on the field and among the supporters. The referee said there was 4 minutes injury time. There then followed the longest 4 minutes that any of these players will ever experience. Ballyboughal had 5 scoring chances from placed balls and open play but our defence held firm.  Goal line clearances from Brian O’Ruairc, Stephen Callanan, Kevin Dowling and, man of the match, Oisin Breathnach made sure that we were not going to loose.  We created one chance ourselves in injury time when Barry Sheanon won a great free but the ball drifted wide from a Paul James shot. Finally in the 8th minute of injury time the referee blew the whistle. Scenes of celebration and joy, as well as relief, erupted all over the pitch.  Paul McAdam and John Dillon accepted the cup from Andy Kettle, the county Board Chairman. Paul in his speech thanked all the players and management from the great effort that they put in. Paul said he is playing adult football for eleven years and this was his first final. Roll on next year.

The team played 6 games to win the championship and had scored freely in all the games up until the final. It shows that no County Final is easy to win and that it takes hard work to get across the line. Shane Kirk summed it up – “This team did not want to lose. They came back from a seven point deficit in an earlier round and showed great heart. I’d prefer to win by a point playing badly than to lose by a point playing great football”

The team returned to Dalkey and brought the Cup on a tour of the town before returning to the Club to celebrate their success. The celebrations went on long into the night.

The players would like to thank the first and second team players and management for their support over the year. It takes hard work from all concerned to win a county Championship.

To win a county championship is great but to win two in one weekend is the stuff of dreams.

More images in the Cuala Gallery

U21 Hurling and Football management
Scroll to top