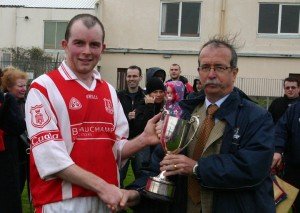 All roads lead to Parnell Park this weekend as our Junior A footballers contest the Junior A championship final for the first time in 25 years. What an occasion it will be , Cuala have only been in the A grade for only 5 years since Gerry Gallen lifted the Junior B trophy.

What a campaign it has been for Enda McGowan and his management team. A nerve racking 1 point win away to Templeogue Synge Street in the first round set the lads on the way. Next up was a trip out to Naomh Barrog, but 5 goals meant the boys had a comfortable win. Now it started to get real serious a quarter final trip away to Craobh Chiaráin. Following a tough start the Cuala forwards started to spark and Cuala took over the match and we even able to survive a last minute onslaught to win through to the semi-final.

Who was next , the auld enemy Kilmacud Crokes. A blistering start from Cuala saw then take control of the game and they were 6 points up at half time. A Crokes goal early at the start of the second half made Cuala sweat but some fine frees saw Cuala home by 4 points and into a Junior final.

So Saturday night in Parnell park at 7.15pm Cuala will take on St Monica’s, all support would be most welcome.