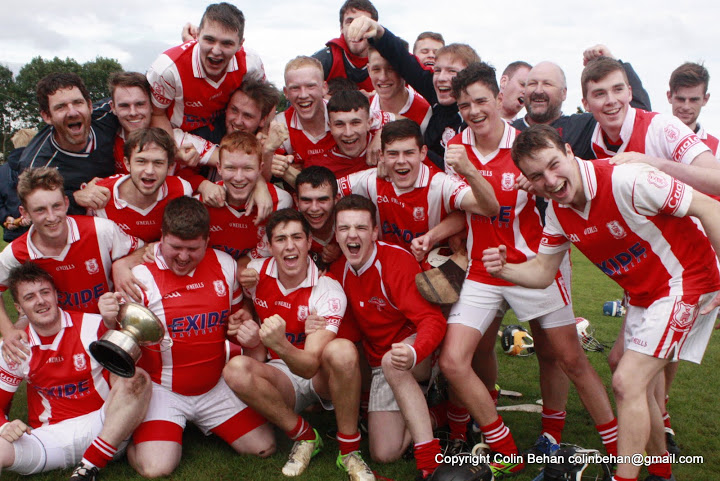 While the Junior As and the Cuala Senior Hurlers basked in the satisfaction of their respective wins in the Championship and the league last weekend,  the Junior F hurlers quietly headed for O’Toole Park with a small band of dedicated supporters to do battle with Clontarf. The weather was damp and the clouds threatened a downpour at any second but spirits were high.  Extra time in the prior game meant a delay of some 30 mins to throw-in but finally, we were underway.

A great game ensued. Once more with a mix of young and old, Cuala served up some splendid hurling. Early misses from Clontarf meant that Cuala were allowed to settle and after a converted free from Shane O’Brien, Conall Molumby hit the net. In fact Molumby was flying, taking on the corner back at every opportunity and drawing frees or taking scores. Gradually Cuala begin to edge away leading at one stage by 1-09 to 3 points as Tiarnan Lane, Brian Murphy and again Shane O’Brien were finding the posts. Then Clontarf went on a run just before half-time , scoring 5 points on the trot and going in with all the momentum at half-time. Score 1-9 to 0-9.

The second half started in a blaze of activity as both sides sought the vital score. Cuala got another point but then Clontarf got the all important goal and suddenly there was only a single point in it. Then the determination and grit started to surface. Andy Power looked taller than his 6’2” frame, Conall Kelly and and Tiarnan lane were suddenly fielding the ball over the heads of larger men, Brian Murphy was driving at  the Clontarf defence and Stevie McDonnell was scraping for every ball.

The younger legs were beginning to be the difference and when a typical Tiarnan Lane drive and shot ended up in the net – there was going to be no denying the Cuala men. 2-10 to 1-10. Points were traded right up to the end but Clontarf just could not get that vital goal and some fantastic blocks by Conall Kelly and Shane O’Brien epitomised the spirit within the team. It finished 2-14 to 1-14.

A fine sporting game of hurling with hardly a foul stroke all afternoon was a credit to Clontarf and Cuala. Well done to the players and management.