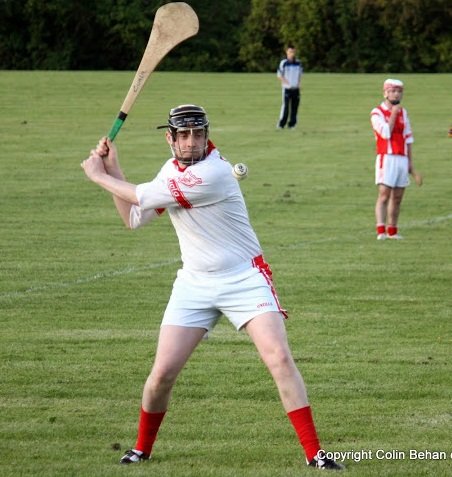 On Wednesday evening the Cuala 2nd team played Clontarf in the 3rd round of the Junior A hurling championship. Both teams had won their two opening matches in the championship, so this was a real top of the table clash, this was evidenced by very healthy levels of support that was present to shout on both teams.

Within minutes of the game starting, it was obvious that the game was been played at a very high standard and that it would take a big performances from whichever team would ultimately taste victory. Cuala edged in front with two early points in a evening that proved difficult to score due to a very strong wind going directly across the pitch, but Clontarf were also soon up and running with two points of their own. The 1st half was pretty even until Clontarf got the crucial score of the half, with a very well taken goal, that Butsie could nothing about, and that score proved the difference going in at half time with Clontarf winning by 1-05 to 0-05pts.

Cuala knew it would take a big 2nd half to win the game and started the 2nd half very brightly, however a few narrow misses prevented them from narrowing the margin. Then when Clontarf counter attacked and got two points (Slightly against the run of play) it stretched their lead to 5 pts and Cuala knew they were now in a real battle to get something out of this game.

To the credit of every Cuala player on the field, the raised their game to another level, our backs were now getting on top, been marshalled by Bobby Brown at No.6 and great performances from Jack Phealan, Niall O’Dowd, Eoin Ryan, Karl Schutte and Donal Lane. We were also starting to dominate midfield through the excellent work of Shane Murphy and Cian Byrne, and actually a very significant contribution came from Eoghan Breathnach when he started foraging out around the middle of the pitch and got onto a number of very important balls.

Our forwards were now getting a better quality of supply of ball and the started eating into lead, through scores and great attacking play from Cilliian Sheanon, Luke Keogh, Brian Fitzgerald, Sean Dowling and Davy Cunningham.  Cuala outscored Clontarf by 7 pts to 2pts during this period of dominance that drew the team’s level with just 3 minutes to play. Cuala now sensed victory, but it was Clontarf who got an excellent point from the side line to push them 1pt ahead. Cuala responded with an excellent long range score from Jack Phealan and then pushed on to get the winner but unfortunately the ref blew the final whistle as Cuala were attacking again.

Overall, this was an excellent performance from the Cuala team, apart from a number of very narrow misses they could have taken the victory, Cuala will now play Faughs and St. Finians in the remaining championship games.

The condition of the pitch, the way it was line out and flagged was a credit to the Clontraf GAA Club, and the grounds men that look after the facility.

Clear the Decks for Summer
Scroll to top