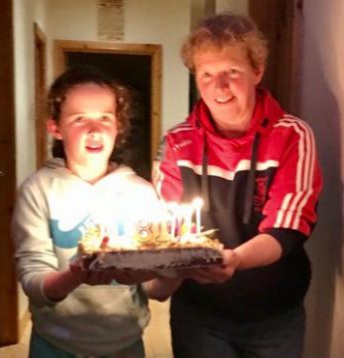 For many of us in Cuala  community and belonging are where we get to live what we value in life.

The magic ingredient is of course the people and especially the key people, the doers, the makers, the connectors.

It is with heartfelt sadness that we announce the death of one of our great leaders today.

Joanne Wylde passed away in her home this morning after a period of illness.

Funeral details are now published  below. 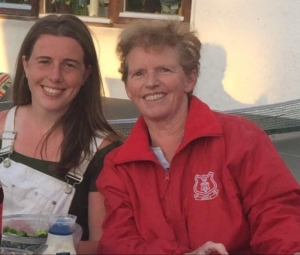 Joanne was in the loving care of her husband Declan and their children Kevin, Mikey, Sinéad and Róisín. The epitome of a Cuala family, where Joanne was at the helm. Often late but always there! Joanne served us as Cuala’s Child Safeguarding Officer for many years, an onerous task she carried without fuss. One evening Joanne arrived to the Coiste with a fundraising idea…The Oscars. The joy and fun it brought to so many could not be measured. It was Joanne who was instrumental in the Transition Year experience in UCD becoming ‘a thing’ for TY students from various GAA Clubs in Dublin. The Cuala All Stars would not exist but for the vision of Joanne. Like us all Joanne cared and then Joanne did something about it. She was a visionary and ‘a doer’. Indeed her vision for the future of Cuala is embedded in the new plans for Hyde Park. Last Christmas Joanne led a few Cuala people into a city centre shelter for the men who had fallen through the cracks. Laden down with gifts from Cuala members to be opened on Christmas morning in a place with glimmers of hope and volumes of compassion. Joanne sat, listened and learned. Unhurried by the fact that her car was abandoned outside on double yellow lines! Joanne focussed on far bigger issues. These are but a few of the places Joanne left her mark in Cuala, not that you would know because she was never the voice, never at the front. Joanne was at the back watching out for those who needed watching out for. Watching out for us, you and me.

For Joanne’s real testimony is in how she connected with people.

‘Are we so lucky to live where we do’ was a phrase Joanne often repeated. And we are, and in Cuala we were blessed to have Joanne in our lives.

We offer our deepest sympathies to Declan, Kevin, Mikey, Sinéad and Róisín.

And to Joanne our deepest gratitudes.

Due to government advice regarding public gatherings, a private funeral will take place this Saturday, January 2nd at 10 am at the Church of Our Lady of Perpetual Succour, Foxrock, followed by interment at Shanganagh Cemetery, Shankill.

Congratulations to our All Ireland Champions of 2020

A different sort of recycling
Scroll to top