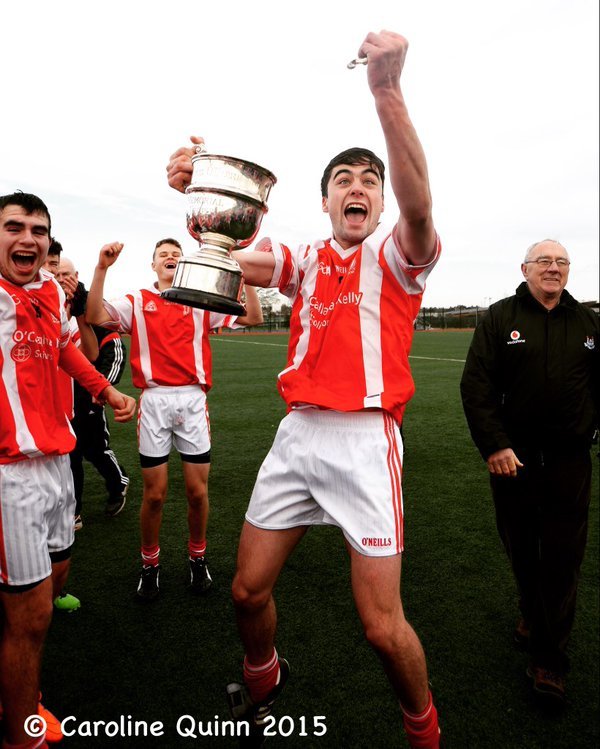 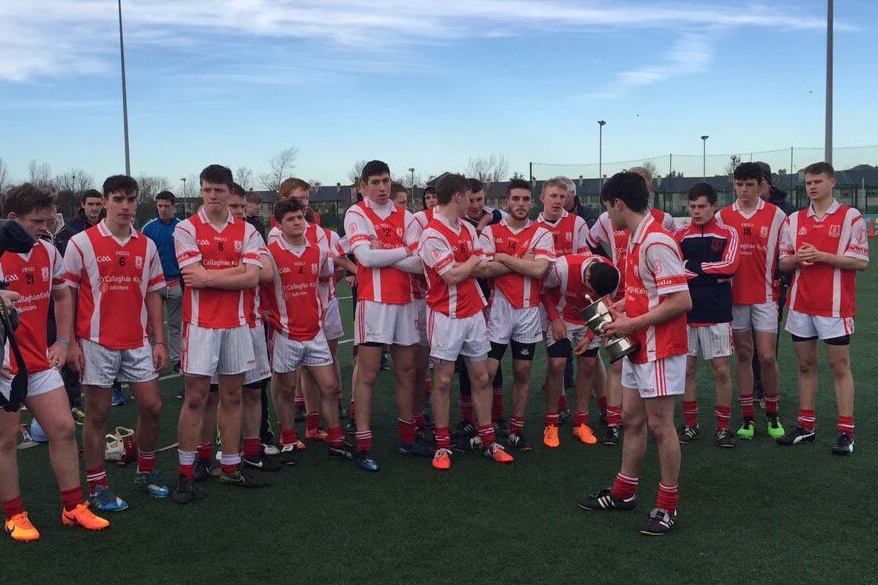 Cuala’s Minor hurlers produced a real Christmas Cracker in the second half of their Championship Final on the all-weather pitch in Ballinteer on Sunday 6th December. But they were put to the pin-of-their-collar in the first half by a fast and furious St. John’s team, who had nothing but winning on their mind. Luckily for Cuala though, every game has two halves, and with renewed fire and passion, the red-and-whites came out a different team after the break!  Demonstrating a potent mix of determination, teamwork and sheer hurling skill, they turned a four point deficit into a five point win.

Cuala won the toss and played against the breeze. Ballinteer were into their stride immediately and caught four balls in their half-back line. Cuala were dropping everything, and failing to adjust to the fast surface. They seemed to be chasing shadows and playing second fiddle all over the pitch. It was going to be another long day for the Dalkey contingent. Ballinteer’s left-corner was causing a lot of grief.  Maas was dispatched to snuff him out. Nothing was sticking up front and balls were raining down on Cuala’s backs as frees were being conceded. The Ballinteer players were fist-pumping every score. Quinn was thrown in to strengthen the middle. O’Treasaigh had to take a yellow as Ballinteer drilled for holes.  It seemed as if it was only a matter of time before the dam burst. A magnificent reflex-save from Di Felice from a deflected block brought a collective cry of astonishment from the huge crowd. A goal at that point and the Reds would have left themselves Everest to climb. But Collopy wasn’t having any of it and took two precious points from the scraps up front. Half-time arrived after a frenetic 30 minutes on a score line of 0-10 to 0-7 in favour of the orange and black.

Whatever was added to the Cuala water bottles at half-time should be licensed! The team was transformed. The Reds now fought like demons to win possession and used it with great effect.  Now it was Ballinteer who felt the force of a Cuala team in full flight. Frees were punished by exocet missiles fired from the back line by Di Felice who is fast becoming a quality inter- county keeper. The local crowd so vociferous in the early exchanges now became more hushed and the Dalkey contingent found their voice. Hartnett and Twomey began to fire their engines around the middle and won some very hard ball. Byrne was pulled out to the 40’ and made a huge difference in the loose around the diamond. O’Treasaigh dominated at centre-back and Cornella and Collopy were impenetrable on the flanks. Ryan, now on the corner of the square should have bagged a goal but hesitated and the door was slammed closed.  Emmet Murphy came in with 20 to go and hit the road running. He caught a difficult ball, turned and struck, an effortless point as sweet as you like; Cuala up for the first time in the game! It was a rallying call to the rest. Cuala went up a gear and scored the next four without reply – O’Callaghan and O’Kelly, Quinn and Lane. The team began to purr. It was now Ballinteer’s turn to attract the wrath of the referee. Byrne has hardly put a foot wrong all year and was in no mood to miss his frees. The score-board clicked forward. Gaps were now appearing at the swimming-pool end. Suddenly there was day-light between the teams and the time was ebbing fast. The pace was hot but the hurling was hotter. McKeown, Lahart and Maas were rocks at the back. Ballinteer wouldn’t lie down. A 20m free in pole position became a life-line. As the St. John’s player lined up the shot, O’Tighernaigh came on with 2 minutes to go and immediately drew yellow for time-wasting. The pile-driver was deflected away by Di Felice for a 65’ and was promptly dropped ‘in-around-the-house’. Cuala cleared it again as the sand was ebbing away. A melee developed and this time O’Tighernaigh saw stars and a John’s player walked for striking. The referee blew for full time and Cuala were home and dry on a score-line of 0-16 to 0-11. The Band of Brothers came of age today and quite rightly earned their place in the elite of Dublin Hurling. There are not too many that can say they have a Minor Championship Hurling medal!

Footnote 1: Congratulations to our Minor B hurlers who lost out by the minimum in their own Championship Final. They came back from the dead and nearly turned over a nine point deficit!

Footnote 2: It was another great week-end for Hurling in Cuala with our Senior Hurlers adding the County League title to their wonderful Senior Championship with a seven point win over O’Tooles, 2-10 to 0-9 with Con O’Callaghan & Jake Malone bagging the goals. The 4rd Adult hurling team also won a promotion play-off to take the Division 8 League title. 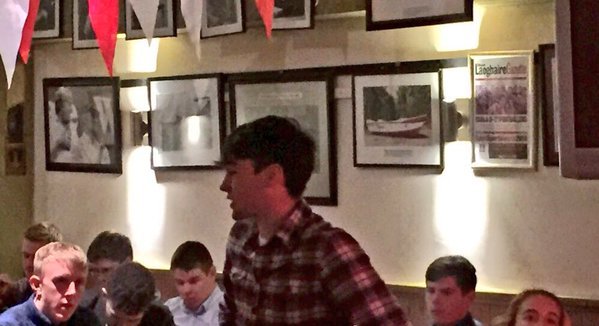 Cuala Captain Dara Twomey makes his speech back in the Clubhouse 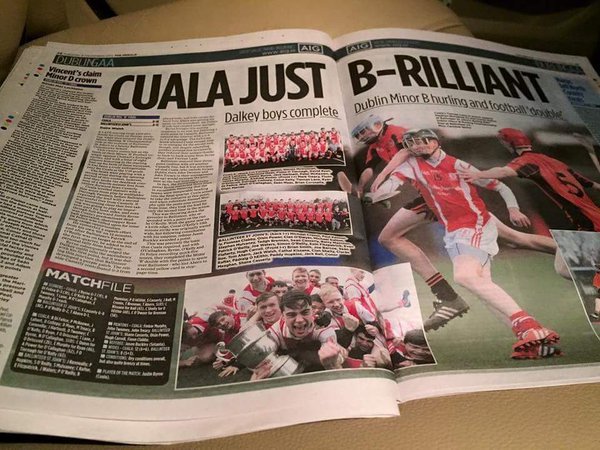