We are delighted to welcome Home Instead Senior Care (Leopardstown) on board as sponsors of the Senior Hurling Team as they prepare for their championship Q-Final in O’Toole Park on Saturday 22nd Sepetember. 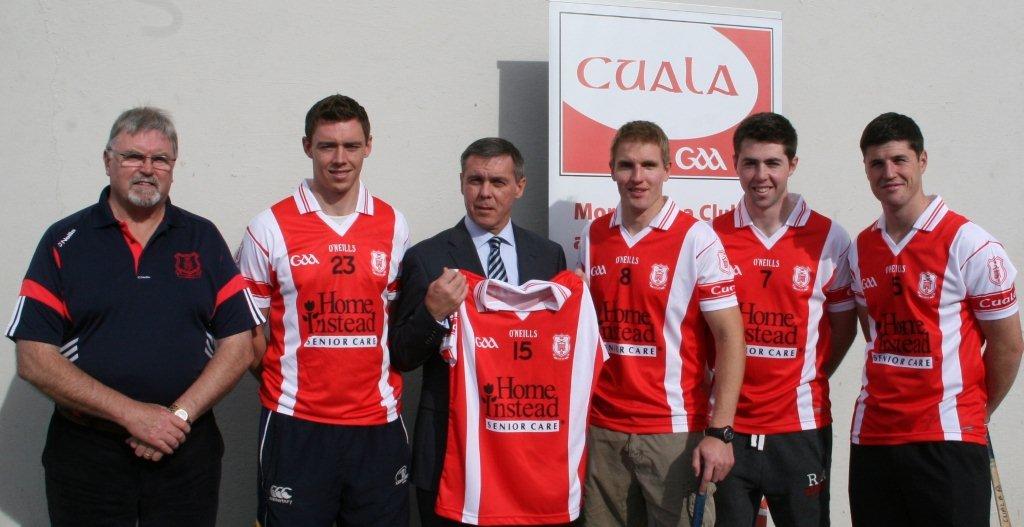 You can find out more about Home-Instead on their website .

We have a smashing bunch of guys based on the U 21 team that won the Championship in 2009 with a few older lads who have soldiered through the  years without ever having their time on the big stage, it’s especially pleasing to see them having one last bash at it but also nice to see the excitement and enthusiasm of the young lads. We also got together a sound backup team who are working to blend the two. Great credit for the breakthrough this year is due to all the mentors who looked after this talented crew that have emerged in the last few years and there are more on the way with Cian O’Callaghan and the 4 other county minors plus we hae 6 on under 17 Dublin squad and other quality lads who didn’t make the county teams, so the future looks good for Cuala hurling.

This is the first time that we have been injury free in recent years and also the first time that Paul and Mark Schutte, David Treacy, Conor and Oisin Gough, Simon Timlin, have all played on the same team in Senior Championship.
We don’t want to be the team that put Boden out of the Championship just for someone else to win it, we are baseing the whole effort on honesty, we want an honest effort from everyone, we are honest about our chances, yes we think we are as good as anyone left in the competition, there’s nothing high fluting about our team talks we keep it simple.

We dont have any facilities in Shankill, the lads arrive togged out for training, stand beside the goalposts for whatever chats we have before and after training, then head home for their shower, we have been there in downpoars, its a throback to the 50s/60s, this is the way it is for one of the biggest Clubs in the country, I must admit its sometimes embarrassing to see away teams looking for the dressing rooms. There are Soccer dressing rooms we can ask for but they’re not ours and we can’t use them for training. We have never heard a complaint from the players. We have to hire facilities from Bray Emmets and this adds to the substantial bill it takes to run a Senior hurling team so it’s here that we want to thank all our sponsors who kindly helped us in all our fundraising this year and to Home Instead Senior Care (Leopardstown) for the set of gear, also the support from our own Club thanks.
We set out to change the image we had as a “nice team” and I think we have achieved that, we now can and will mix it with the best, proved by our performances against top teams in Kilkenny “An ceada sa gcat agus an deireannacha as” – the first into battle and the last out. Come on the banner! plus we wanted to have a style of play that suits the players we have and that’s worked out also, our aim this year was to avoid relegation and finish safe in the league, we more than did that, and to get out of our group in the Championship, but now again being honest we want to win it. Honesty is the best policy.
On a final note when I think of all the “auld lads” (too many to mention)  that have since gone to their eternal reward, who started teams in Dalkey and Dun Laoghaire in the 50s and 60s how proud they must be when they look down and see the pile of cars and young lads in Hyde Road every Sat and in Croke Park playing on All Ireland days and walking all over the ” Boro” with hurls and Cuala tops….”Hon  the Warriors”
Harry Roberts