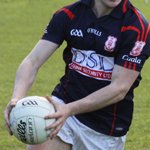 After a couple of away fixtures that ended in disappointment, our senior footballers secured their first win of the league with a fine display on Saturday night. In a rematch of last year Inter final Cuala welcomed Fingallians to Dalkey and the large home support enjoyed an excellent Cuala display.

After a tentative start in which Fingallians plundered a goal , Cuala began to take charge mainly through the half back line dominance. Conor “Cobsy” O’Brien flicked over a couple of nice points and then a superb goal from the marauding Fitzy set the tone. Cuala hard working half forward of the Lukey , John and Ryan were scoring regularly and with Conor Mulally composed in defence there wasn’t much a gallant Fingallians side could do.

So well done to Pat Dolphin and his management team for a fine evenings work. Next up for our senior footballers ? their first senior championship match in Parnell park May 8th v Vincents !!!!

Photo’s of the game : https://picasaweb.google.com/CualaGAA/AFL2VFingallians#

Good Luck to the 99 Boys
Scroll to top