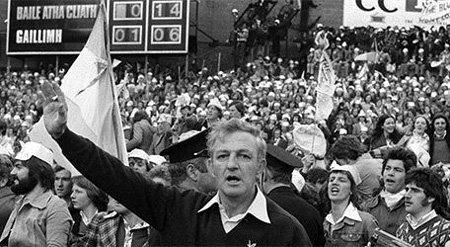 For our younger members, who may not be as familiar with the great era of  Dublin Football and Hurling which was motivated by the late Kevin Heffernan,  Colin Behan has penned this summary of Kevin’s illustrious contribution to the game and his links with Cuala.

Legendary former Dublin player and manager Kevin Heffernan has passed away last Friday after a lengthy illness at the age of 83. ‘Heffo’, as he was affectionately known, was marked out as an outstanding talent from a young age at both football and hurling, although it was the former code that he was to really excel in as both player and manager.

Born in Dublin in 1929, Heffernan was brought up in Marino and went on to enjoy a lifelong connection with the St Vincent’s Club. He attended the local Scoil Mhuire and St Joseph’s CBS in Fairview, where he was part of the team that won the 1945 Leinster Colleges Hurling title.

He excelled at both codes at minor level for Dublin, winning a Leinster title in football in 1946 and one in hurling in 1947.

He went on to make his senior debut in football later that year, although it was a baptism of fire in many ways as he ended the game with a broken jaw, just days before he sat the Leaving Certificate examinations.

Heffernan won a junior All-Ireland medal in football in 1948 and picked up NFL winner’s medal in 1953 and 1955. He was part of the Dublin side that won the Leinster title later that year, but they were beaten by Kerry in the final, a rivalry that was to later define his career as a manager.

His best year as a player came in 1958 when he captained Dublin to the double of League and All-Ireland, where they beat Derry. He would win Leinster titles in 1959 and 1962 before retiring from playing at inter-county level.

Heffernan’s club career is one of the most storied in the history of the game, winning 21 Dublin titles in total; 15 in football and six in hurling.

His six Dublin hurling titles came between 1953 and 1962, and were all in years where St Vincent’s also won the football title.

Heffernan’s career as Dublin manager began in late 1973, and he guided them to their first Leinster and All-Ireland titles since 1963 the following year, beating Galway in the decider. The achievements won him the 1974 Texaco Footballer of the Year award, the only non-player to win it.

Dublin were favourites to win the 1975 final, only to be beaten 2-12 to 0-11 by a young Kerry side, but Heffernan and Dublin gained their revenge the following year with a comprehensive seven-point win in the final.t

It was this era that captured the imagination of the Capital’s Population, what Dublin supporter who lived through that era will ever forget Blue Crepe paper hats and chanting

Heffernan stood down from the post following the victory, but returned in 1978. Dublin claimed a sixth successive Leinster title that year, but Kerry again stood in their way in the final, winning this time by 17 points as they began their four-in-a-row run of title victories.

After rebuilding the side in the early 80’s, Heffernan would claim a third All-Ireland title in 1983, when the “12 Apostles” of Dublin, including Cuala Legend, Mick Holden, beat the 14 from Galway after four players were sent off in an ill-tempered final.

Heffernan was named at left corner-forward on the GAA Football team of the Century as part of the 1984 centenary celebrations and also the Team of the Millennium.

In 2004, at the age of 74, Heffernan was in charge of the club’s under 15 hurling team, which, with a late free from Oliver McElvaney, won a memorable championship final against Cuala. If you want an unbiased account of that match ask the Cuala Manager that day John Treacy, but that’s another story.

He later managed Ireland to victory over Australia in the International Rules Series in 1986 and continued his coaching at St Vincent’s and as a consultant to the Dublin minor team in 2007.

Help make our house a better home
Scroll to top