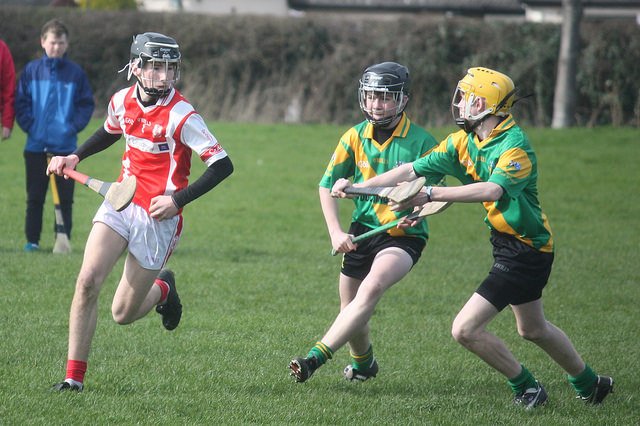 Two points in the final 6 minutes from the ever-accurate Shane Hayes gave Cuala’s U15 hurlers a share of the spoils in the first round of the League in blustery, difficult conditions in Thomastown Park. To their credit Cuala never gave up the fight when the game looked beyond them and scrambled a draw at the death.

On a surface more akin to a cabbage-field then a sports field, stylish hurling was in short supply and the gale-force wind pushed play to one side of the pitch. Cuala started brightly and had 0-4 points on the board before Thomas Davis raised a white flag on 20 minutes. However a free brought forward by the referee because of a silly Cuala indiscipline, resulted in a goal just before the half-time break. Despite a brilliant collective performance from the seven backs, Cuala went in 1 point down on a score-line of 0-4 to 1-2.

Conall O’Toole continued his strong first-half performance with a fine point after the break and a free from Shane Hayes put Cuala back in the driving seat. However a long-range point and a second goal from a physically stronger Thomas Davis team rocked Cuala back on their heels. Ryan Malone was having none of it and cracked a brilliant free to the net on 40 minutes levelling the match. The game was now in the melting pot but it was Davis’ who again took the initiative scoring two quick points. Aaron Carey kicked into life and scored a neat point from close range and then set up Shane Hayes for another. However with time ebbing away, Davis’ again went ahead by two and it looked all over for the reds. However Cuala didn’t give up the fight. Shane Hayes was set up for a point by Conall O’Toole and when Ryan Malone was unceremoniously dumped to the ground 40m out, it was left to Shane Hayes to level the match with a free in difficult conditions. He drilled his shot over and thumped the air with delight. Referee blew it up on a score-line of 1-10 to 2-07. Best for Cuala were Conor Grant, James Tobin and Killian O’Shea in defence and Conall O’Toole, Ryan Malone and Shane Hayes up front. Next up, Castleknock and Lucan away on 2nd and 6th April respectively.

Intermediate Footballers Get Off To AFL4 Flyer
Scroll to top