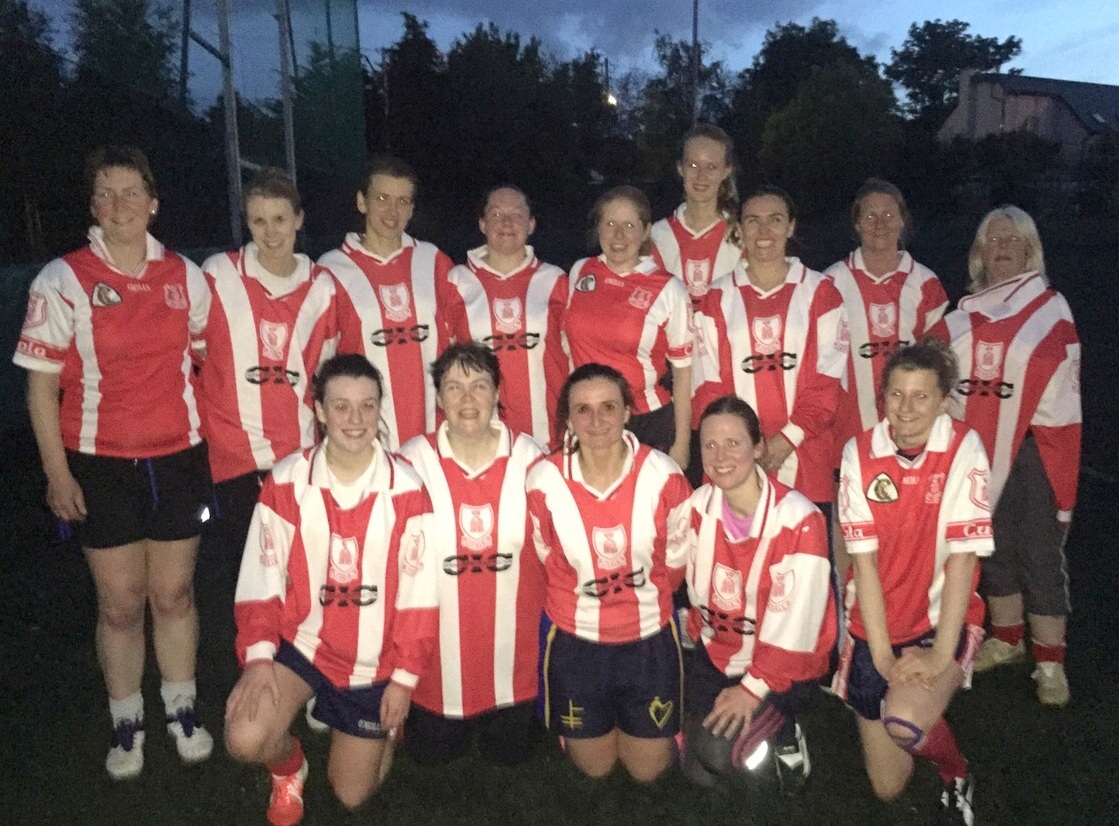 Played under lights on Crokes All Weather pitch in Glenalbyn, a battling performance from the Cuala ‘G4M&O’ team with a goal in the dying minutes of the game saw them snatch a deserved victory against local rivals Kilmacud Crokes last Wednesday evening.  Fresh from a big win against Glencullen’s Stars of Erin the previous week, Cuala had to step up a level against a well drilled Crokes outfit that beat us well in the corresponding fixture last year

The game was played 13 a side with 20 minutes a half.  The Cuala team had a distinctly international feel to it with 2 Germans and a rugby playing Spaniard playing, who along with her Blackrock ladies rugby teammate was playing in her first ever GAA match.

The home side got off to a blistering start with a point in the opening minute of the game. Crokes continued to get the better of the early exchanges with Cuala slowly getting into the game and getting used to the non grass surface.

After 5 minutes Cuala were beginning to find their feet with centerfield trio of Hannah Byrne, Hilary Thompson and Claire O’Driscoll getting on top around the middle.  Cuala’s defence, well marshalled by Trish O’Toole, Paula Gregan and Mary Byrne, were also now getting a handle on the Crokes forward line and making life difficult them. 6 minutes in, following some good work around the middle, the hard working Leanne Doyle got the opening score for Cuala with a well taken point.

Crokes responded well however with a score almost immediately from the kick out to put them back in front.  Crokes then got the first big breakthrough with a goal putting 4 points between the teams.  The score seemed to spur on the Cuala team who responded magnificently with a superb point from midfield dynamo Hannah Byrne leaving the score 1-2 to 0-2 mid way through the first half.

Following a switch to centerfield for Maire Ní Giolla Phadraig, Cuala were by now getting on top with Kristin Fischer and Grainne Carroll getting in some great tackles and clearances from the heart of the Cuala defence and Joyce Groake and Alexandra Teetz creating some good chances up front.  Debutants Rose Alice Murphy and Manuela McCarthy (Ni Ni) were also making their presence felt and working extremely hard in the forward line. It was real end to end stuff with chances for both sides and it took a great shot from distance from Hilary Thompson to narrow the score difference to only 2 points with half time fast approaching.

A point for Crokes just on the half time whistle put the home side 3 points ahead at the break, half time score Cuala 0-3, Kilmacud Crokes 1-3, a well contested first half with all to play for in the final 20 minutes.

Cuala started the brighter in the second half and got the opening score of the half with the versatile Grainne Carroll, now playing up front, coolly slotting over a point despite a lot of attention from a Crokes defender.  Crokes responded well with a point 2 minutes later but again Cuala rallied and another great Leanne Doyle point narrowed the difference to 2 points.

The game was now really in the melting pot with both teams raising their performances and looking for the decisive score. With some robust exchanges it wasn’t for the faint hearted with hard tackles and blocks going in on both sides. Gradually Cuala once more ground down the opposition and the turning point in the game seemed to come when a long ball in was fumbled by the Crokes goalkeeper and Claire O’Driscoll was on hand with a deft touch to knock the ball into the Crokes net. It was not to be however, with the referee controversially awarding a free out. Despite this setback Cuala again lifted their performance and with 5 minutes still remaining went looking for another goal to win the game.

It was now all one way traffic and with only minutes remaining a low shot from Leanne Doyle at the edge of a crowded square found its way to the back of the Crokes net putting Cuala deservedly ahead for the first time in the game with less than 3 minutes remaining. In fairness to Crokes they rallied again but the Cuala defence wasn’t to be undone and the end of the game was signalled by the lights going out on the stoke of full time with Cuala ahead by the narrowest of margins with the score Cuala 1-5, Crokes 1-4, a famous victory over the ‘old enemy’ and now two back to back wins for this tenacious Cuala team.

Well done to all concerned. In defence Kristin Fischer, one of two fräuleins on the team and one of our most improved players this year, had a great game. Alongside her, Mary Byrne, one of 2 sisters playing and sibling of Cuala adult camogie star Caitlin, showed great determination getting in a series of great tackles and blocks.  Paula Gregan, one of our longest serving G4M&O players and with 2 nieces Sarah and Ruth Egan stars of the Cuala adult ladies football team, showed all her experience keeping a calm head under pressure and marshalling the Cuala defence throughout the game. Trish O’Toole was another to impress in defence for Cuala making some spectacular clearances out of defence.

In the middle third of the field, Maire Ní Giolla Phadraig, one of our relatively newer players, put in a ferocious amount of work with plenty of skill and proved herself one of the Cuala stars on the night. Alongside her, Hilary Thompson, former Cuala and Dublin camogie player, once again showed herself as one of the key players for Cuala on the night putting in a faultless performance.  Hannah Byrne, sister of Mary and one of our younger players who already has experience playing with the Cuala adult ladies team, again showed her potential to move up into playing more regular competitive football with the club, with a great night of football. Team captain Claire O’Driscoll, another of the Cuala G4M&O longer serving players and mother of Dublin U14 camogie and football star Grainne, showed all her experience leading by example throughout the game.

Up front, top scorer on the night Leanne Doyle, proved a match winner with 1-2 to her name and is a great example of a G4M&O player who has moved up the ranks and played a number of seasons with the Cuala adult ladies team. Joyce Groake, another of our most improved players, impressed on the night proving herself a handful for the Crokes defence. Alexandra Teetz, the second of our German fräuleins on the team, was another to impress on the night particularly as she has only taken up the sport in the last few months. Grainne Carroll, one of our most versatile players on the night, excelled in defence in the early stages, moved up front in the second half and capped a great overall performance with a crucial well taken point to open the scoring and set the tone of the game for the second half.

Finally, special mention for our two rugby playing debutants. Rose Alice Murphy and Manuela McCarthy (Ni Ni). They took to the round ball with no difficulty showing great movement and tenacity and plenty of GAA potential.

Most importantly however it was a great team performance and a hugely enjoyable night and it sets the team up nicely for the upcoming Mini All Ireland but the section are still looking for more players, beginners especially welcome, email cualagaelic4mothers@gmail.com for details.