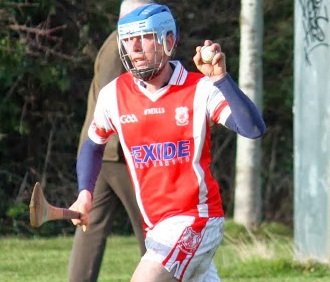 ADULT HURLING LEAGUE – SUNDAY 2nd MARCH, SHANKILL
CUALA 4-13; COMMERCIALS 1-8
Cian Byrne may have taken the ‘man-of-the-match’ accolade, but it was the predatory instincts of ‘evergreen’ Ógie Ryan that caught the eye in this highly entertaining first round AHL game played in heavy, wet conditions in Shanganagh Park on Sunday 2nd March. Ógie scored 4-3 from play and had the Commercials full-back line in all sorts of bother from the start.
It was a battling, spirited performance from a Cuala outfit that wouldn’t allow their opposition a moment’s peace. At the finish, Commercials looked exhausted and frustrated and were probably delighted to see the back of the pitch and get back to the warmth of their Vale View dressing-room. With Cian Byrne driving the train from centre-back, supported by his two ‘engine-stokers’ Anthony Higgins and John Dillon on the wings, he dominated proceedings from start to finish and snuffed out many of the attacks from the Citiwest outfit. Alan McCarthy, Dylan Kennedy and Conor Bass worked tirelessly around the middle and drove at the heart of the Commercial’s defence time after time. Ed Monaghan clipped over three beauties from out on the right and Jack Butler hit a monster from the other wing. Such was the dominance of Ogie Ryan at full-forward that Sio Cullen could only hope that a ball might break through to him in the corner – he was living off the scraps that Ógie threw him! With 20 minutes gone, Cuala were 2-8 to 0-2 to the good and looked as if they were cruising. In the defence Colman ‘Bandanna’ O’Drisceóil took it easy and let his corners do the work for him. Ray Walsh and Oisín Mc Cann played everything from the front and didn’t allow the Commercial front-men a sniff of the ball. Colmán sat back in the pocket and shared a smoke with Stano in nets. McCann was having his own personal battle with his marker, as the two of them rambled up and down the field shoulder-to-shoulder for most of the game! On 22 minutes, a 20m free found the back of the Cuala net. But it only served to annoy Ryan up front. The green flag had hardly been replaced at one end, when at the other he latched onto a loose ball, and snuffed out any chance of a green-and-red revival with his hat-trick. The score was 3-9 to 1-8 at the break as Barron’s Braves came in for the oranges.
With five new ‘live-wires’ added to the mix, Cuala continued where they had left off. Byrne was as formidable as a tank at centre back and fired shell after shell into the Commercial’s defence. Ógie took a well earned rest up front, sat back and let his ‘second-fiddles’ take over the scoring. McDermott came out to deeper waters and clipped over two points from clever Dan Holden passes. McDermott returned the favour, and Holden got off the mark with an expertly hit point. Commercials to their credit didn’t give up and forced two wonderful saves from Ceannas Dowling in nets. McCarthy and Kennedy fired over a couple of long-rangers, Holden tagged on his second and the referee called time on a score-line of 4-13 to 1-8. A very enjoyable game played in a very good spirit.