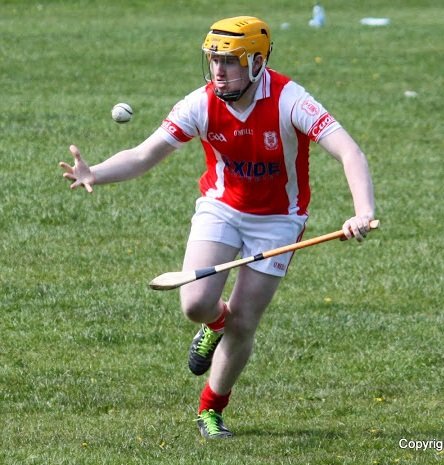 20 minutes left on the clock, Cuala seven points down. The game looked lost. Drama isn’t the word for it. In a 3 minute burst Dylan Kennedy scored one goal and made a second. Ceannas Dowling buried the free to the top of the net. The excitement was fever pitch. Pitch invasion, heated exchanges with the referee, foul language, high-intensity – and that was only from the side-line! It eventually came down to who would best hold their nerve.

The first half of this enthralling game was like watching paint dry. Both teams were nervous, there were lots of mistakes. There was no flow to the game, the pitch was short and the Naomh Fionnbarra line made it narrow. ‘Barrs had most of the play but tellingly, they shot 9 wides over that first period. It would prove costly for them at the death. Denis Monaghan, Colmáin O’Drisceóil and Eoghan Dalton were immense at the back. 0-3 each at the break, two points from Odrán Waldron and a long range free from the ‘keeper was all Cuala could muster. There was little evidence of what was to follow.

Within a minute of the re-start, Finbarrs had rattled the net. A neat passing movement left their midfielder clear on goal. He didn’t miss. Confidence surged through the Blue-and-White jerseys. Their line was ecstatic, hi-fives everywhere. Two more points from their other mid-fielder was pegged back by a Dowling long-range free. Cuala had thrown Dan Holden & Conor Bass into the fray. Waldron had retired injured and Daragh Connolly had replaced him. Cuala were trying to grapple with the Naomh Fionnbarrra dominance around the middle, but their tails were up and they were flying. Another breach in defense saw their corner-forward slot another goal on 40 minutes.  Cuala were 2-5 to 0-4 down and the writing was on the wall for them. One thing that can be said about this outfit is that they don’t give up easily. Changes were needed. Dan Holden was moved back into mid-field, Dylan Kennedy went onto the ’50 and Ed Monaghan pushed into corner forward. Daragh Connolly slotted a free. Dowling was finding Monaghan with long-range puck-outs and he was making hay in the corner.  He took one, threw a ball into Kennedy who burst through the tackles and struck a shot to the net. The come-back was on. Simon Cullen took a lovely point. Connolly slotted another free, and then, from the widest of angles, hit the very top of the right-hand post, but the ball went wide. Now it was the Northsiders turn to get worried. The tide was turning. Holden was now totally dominating the middle. Rory Doyle, Oisín McCann and Kevin Roche were closing down the back-line, Colmáin O’Drisceóil, Denis Monaghan and Eoghan Dalton mopped up anything that came inside. Kennedy was now like a thorn in the Cabra-mens’ side. He came in on a burst and carried half the Finbarr defence with him. 30 m free, the Barrs lads objected, the referee moved the ball forward. Now it was in range. The artillery was brought up from the back. Dowling struck, the rest is history! Level, 2-7 apiece. Either side could still win it, but it was Cuala who held their nerve. Holden hit a point out of the ground, Barrs responded with a point of their own. Connolly converted a free. Up stepped Ed Monaghan for his piece de resistance: two wonderful points from way out on the left, reminiscent of his two against Boden in the Senior Championship years ago. The two scores turned the game. Cuala were now 3 points up with 2 minutes on the clock. Naomh Fionnbarra were pushing forward, their supporters were 15m in onto the side of the pitch. They were pucking every ball. The excitement and the tension were palpable. Could they get a goal back. Their mid-fielder hit one from distance, it dropped into the square, was pulled on by the wing-back and ended in the back of the Cuala net. Shouts of square-ball were waved away by the referee. 2 minutes left. Would both sides settle for a draw, would the referee blow early? The ball was launched long. Connolly collected and went to go through. He fell as if polaxed. Free. Cuala ahead by the minimum. Play continued. The play moved into the Noamh Fionnbarra supporters massed on the dressing-room side of the pitch. A sharp whistle. No-one could see what happened, though Oisín McCann was in the vicinity. A Fionnbarra free on the sideline, 35m out. Last puck of the game… wide! Whew! Cuala advance into the Championship quarter-finals on a score-lie of 2-12 to 3-8. What a game. Despite the tension, there wasn’t a dirty stroke pulled in the game. A credit to Hurling.

Footnote 1: An historic week for Adult Hurling with the two adult hurling teams joining the Senior team to progress to their respective Championship quarter-finals.

Footnote 2: At present Cuala are top of their Championship Group with Plunketts, in the other Group Olafs and Skerries are on top.

Next up: 3rd Team Hurlers play away to Realt Dearg (2) in the League on Sunday 22nd June 15:00 and play Championship round-robin against Realt Dearg (1) at home on Thursday 3rd July at 19:30 in Shankill.