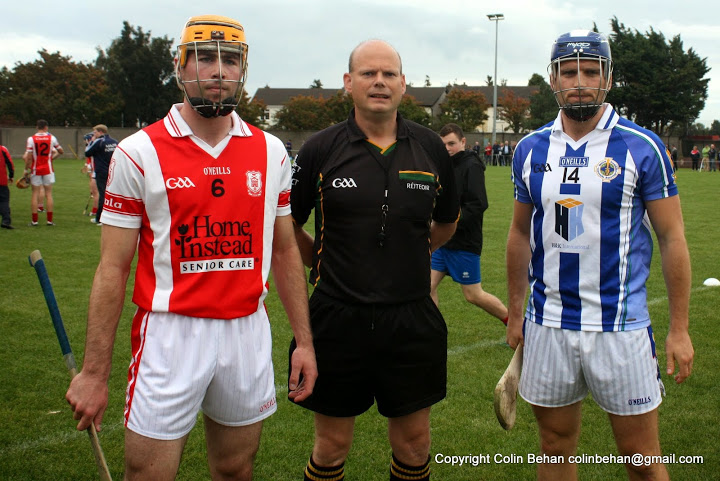 Small margins, inches that was the difference between the sides. Cuala would come back from the dead and drag a double-score advantage back to the minimum. Boden would only score a single point from play in the second period and were hanging on for their lives at the end. But missed opportunities by Cuala at the death, and a penalty save early in the second half, cost them their place at the semi-final banquet. O’Toole Park is a short pitch and didn’t suit the smaller, faster Cuala players. Boden bruised their way through the first half, dropping a player back and out-muscled Cuala for most of the dirty ball. With pressure everywhere, the quality of delivery into the Cuala attack was poor. The Boden backs wouldn’t allow Cuala’s potent forwards to settle, and space was always at a premium. Playing down the hill, Boden’s Shane Durkan was given the freedom of the park early on and was launching missiles into the Cuala defence. He helped himself to a point. Paul Ryan was in the mood today and caused some heart-stopping moments for the Cuala rear-guard. But O’Callaghan, Barron and Reid were outstanding and O’Braonáin was cool under considerable pressure. Cronin won three brilliant catches at centre-forward, but such was the intensity of the battle, nothing resulted. He was called for over-carrying while hurtling 5 defenders. He deserved better from the officials. Boden conceded frees as they bossed and bullied their way through the first period and were up 12 points to 6 at the interval. But, crucially, Cuala didn’t concede a goal. At the break Mattie made changes and they worked. Carty in, Butler to mid-field, Moran to half-forward. From the throw in the game was turned on its head. It was now Cuala’s backs who totally dominated as Boden began to wilt in the autumn sun. Gough and O’Callaghan were now storming out with ball from the defence and launching attacks from the back. Timlin and Reid were following the same script and Cuala’s forwards were finding some little space. Carty seemed to hoover up possession around the middle and turned the game. Seán Treacy took a pass from his brother and ran at goal. Boden’s defenders closed ranks and took him down. Boden put their three quality inter-county goal-keepers on the line – Lambert, Maguire and McGarry. Cuala needed the goal, but it was always going to be a daunting task for O’Braoináin from 25m and the shot was saved. But the game continued, there was loads of time. Cuala were on fire. Three points were clawed back within minutes and the momentum was all with the Dalkeymen.  David Treacy moved outfield. Boden pulled Keaney back to mark him. Treacy threw a pass to Butler, he didn’t miss. The margin was two with 11 minutes to play. Paul Ryan was now patrolling the left-corner back position as Boden threw caution to the wind to defend their slim lead. It looked as if nothing could stop the Cuala juggernaut as they pressed for victory. But Boden have a lot of experience. A magnificent shot from McGarry under extreme pressure far out on the right, went skyward and dropped inches over the Cuala bar. Another clever pass from Waldron to Butler and he took his second point, Waldron himself took a lovely score from distance and now there was only the minimum between the teams. Dubious decisions and sudden injuries were wearing down the clock. Against the run of play, the official called Gough for catching the ball three times, Ryan split the posts. It would be their third and last point of the half! Con O’Callaghan and Kyle Braine were introduced to freshen up the attack. With Boden’s backs getting jittery, Braine almost took a goal with his first touch. Carty won the puck-out. Moran took the pass and struck from distance, but the ball tailed to the left and wide. David Treacy hit one under dreadful pressure but again the white flag stayed still. With time almost up, he again took possession in mid-field, and moved forward. Keaney took him around the neck and received yellow for his trouble. But Connolly put the resultant free agonizingly left and wide. The final whistle went and Boden knew they had got out of jail. Cuala collapsed in exhaustion. The hurling season is now over for them – Boden move on to meet Crokes.

Footnote: Ballyboden’s young manager came into the Cuala dressing-room after the game and as much as admitted that the better team lost.