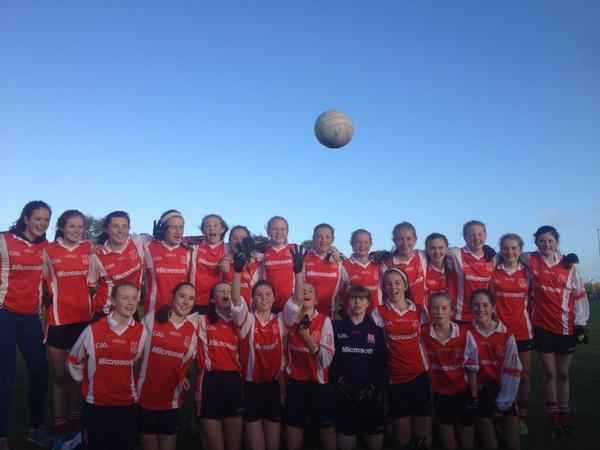 The Cuala U13 girls produced a very special first for the club on Saturday when lifting Cuala’s first ever Division One title at Juvenile Girls level.

Having overcome Kilmacud Crokes by one point in a spirited semi final at Meadowvale three weeks earlier the girls were on the road to face table topping Ballyboden in the final.

Conditions looked like they would play a part with many pitches closed across Dublin but Cherryfield was deemed playable albeit with a ferocious wind blowing down towards the club end.

There was a great turnout from both clubs with regular parents and mentors bolstered by generations of family members and support from across many different teams and sections within Cuala.

Cuala won the toss and chose to play with the gale to get off to a good start.  They could never have dreamt of the first two minutes though with first Susan Slowey and then Rachel Hartnett burying the ball to raise a green flag.  Indeed it was almost 15 minutes into the game before the hosts mounted a serious attack but that was the first of a dozen wides that would prove costly.

Anna Quinn took a great point off her right hand side and at the other end Ellen Deegan was playing the game of her life in goals.  Two stunning first half saves would not have looked out of place from Cliodhna O’Connor at Croke Park.  Grainne O’Driscoll added another point and the girls went to the break leading by 2-02 to 0-02.

The strong wind showed no sign of slowing and Boden started the second half with a whirlwind of their own breaching the Cuala full back line of Grace Nash, Molly Lewis and Ciara O’Shea to make it a three point game.

That was as close though as they got.  Riona Mulally was marshalling her half back colleagues Emma Ryan and Sarah Healy who made some great tackles to keep the Boden forwards having to shoot from distance.  Another great save from Deegan kept the lead as it was and Hartnett and O’Driscoll were winning ball at midfield and setting up Sinead O’Carroll and Laoise who were keeping possession in smart fashion.

A quick ball from the back from Nash to Hartnett was played into O’Driscoll at full pace and the lead stretched again.  A quick free from Molly Basquille, having her best game of the year meant it was five points.  Claire Ahern was holding the ball well at Full Forward but as the game stretched it was time for fresh legs and it was two subs Sadbh O’Kelly setting up Louise McKeown that sealed the game with less than five minutes on the clock.

This is a group that has trained and played together as a strong team and the support from the line of Lorna Doherty, Thea Hodges, Emma Mulholland, Anna Sheridan, Maebh Sheehan and Mary Kate O’Sullivan was as important as if they had scored the crucial point or made the last ditch tackle.

There were great celebrations at the end, well deserved and it was great to see club members like Fintan Quill, who has done so much to further the prominence of the girls section, there in person to witness what was the first but will not be the last win at this level.

Well done to Magnus O’Driscoll, Brian Mulally and Mick O’Sullivan who led the team and to all the mentors that have played their part over the years leading up to this win.