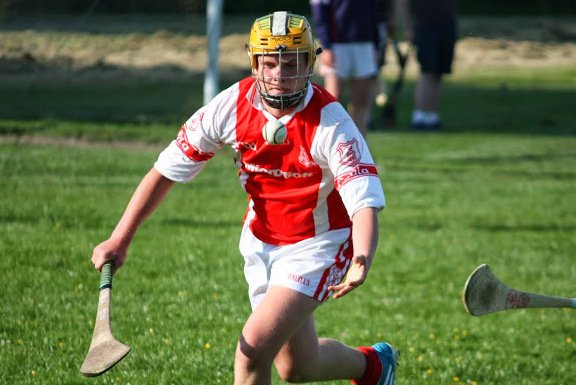 3 minutes into extra-time, the gloom descending, the rain had turned the pitch into an ice-rink and everything was soaked. For the fifth time Di Felice began his journey from nets. This time he had to land one from 80m to draw the game. Serious pressure for a young man, but he has prepared for such occasions. Lane dried his hurley, he lifted, he struck, the ball sailed high over the bar and the Cuala cheers could be heard through the gloom. More guts than in a butcher’s shop! A game that was dead and buried was dragged back to life. The referee wouldn’t allow time for the re-start.  The Band of Brothers were down five of their key players, this was their third game in three days, Faughs were just coming off a 19 point win over Crokes and, to add to the sense of woe, the rain was incessant. But these guys won’t lie down. They never give up and in truth were unlucky not to take both points.

Within a minute of the start Di Felice was already called into action. He blocked a pile-driver from the Dublin centre-forward MacVeigh and deflected the follow-up over the bar. Cuala settled and tried to cope with the poor conditions. Handling errors were frequent and the heavier Faughs players were coping better with the slippery surface. Daniel Johnson was giving a man-of-the-match performance for Cuala. He blocked, harried and kicked his way forward and would not give an inch all through the game. Di Felice converted his first free from 70m. 11 minutes in MacVeigh again, 0-2 to 0-1, and scoring was going to be difficult. Then a disaster! A long delivery was well caught on the line by Di Felice but, as he tried to clear his lines, the 12 got a block on it and the ball ended in the back of the Cuala net. Heartbreak! Cuala went again. A wonderful passing move between Diarmait Maas, Cormac Quinn and Fionn O’Drisceoil ended up with Michael Wylde taking a nice point off his left. A blast up the other end saw Di Felice again called to action. He dived smartly to his right and made a hugely impressive save from a low shot skidding towards the net. The ball moves back up field. Jack Hartnett wins a catch and turns for goal. He’s pulled down 25m in front of goal and Stevie McDonnell goes low. The ball is deflected out, but the ’65 is pulled left and wide. Half-time score 0-4 to 1-5 to Faughs.

Cuala started with more zeal in the second period. Point for point now with Mac Veigh manufacturing most of the scores for Faughs. A fine hurler, there’s no doubt he will grace the Dublin jersey next year as a Minor. McDonnell and Wylde take two apiece, MacVeigh and the full-forward respond with two each. Time was ebbing away. The third quarter was over and still just the goal between them 0-10 to 1-10. It looked like the break-through just wasn’t going to happen. Cuala pressed forward and Faughs were now visibly under pressure at the back. Clearances were falling to red jerseys. Quinn and Maas in midfield were immense. O’Drisceoil was now in control of things in the centre, Coronella was imperious at the back with Rory McMahon and Nessan MacGearailt holding the danger men up front. Johnson and O’Floinn were now pressing forward. A McDonnell goal chance was taken off the line by the impressive Faugh’s full-back. The ball is pumped back in again by Maas. McDonnell is again put through but the ball is like a bar of soap and slips out of his grasp just as he is about to pull the trigger 10m out. To add insult to injury, Faughs break up-field and convert. With thirteen minutes to go, in a game where scores were as difficult to find as hens teeth, Cuala were down by 5. Game over, everyone waiting for the appearance of the ‘fat lady’ to sing. The side-line had already packed up for the long walk back to the cars. James Murphy stirred himself and broke through the tackle, Wylde was on his left. The pass was perfect. Wylde went low and caught the 6” between the keeper’s foot and the post. Goal! Level 3 minutes to go. Puck out lands on McVeigh, he turns for goal and is crowded out. The referee blows the whistle and awards a free. The centre-back converts. Cuala are again facing into the abyss. Time is gone. O’Floinn takes possession on the half-back line, he’s taken down, Faughs players argue, the ball is brought forward. 80m out… and the rest is history. Drawn game 1-12 to 1-12.

Footnote 1: After 8 games, Na Fianna are top of Division 1 on 13 points, Cuala lie fifth on 7 points.

Footnote 2: Cuala have marginally lost 4 games to date in this League. A 1 point loss to Na Fianna, and three 3 point defeats to Boden, Kilmacud and Vincents. Only very minor changes will be required to turn these losses into wins going into the second half of the League.

Next up: Cuala’s U16s play an inter-county U16 tournament in Carlow on Saturday 28th June and next play away to Ballyboden in the League on Tuesday 8th July at 19:30.