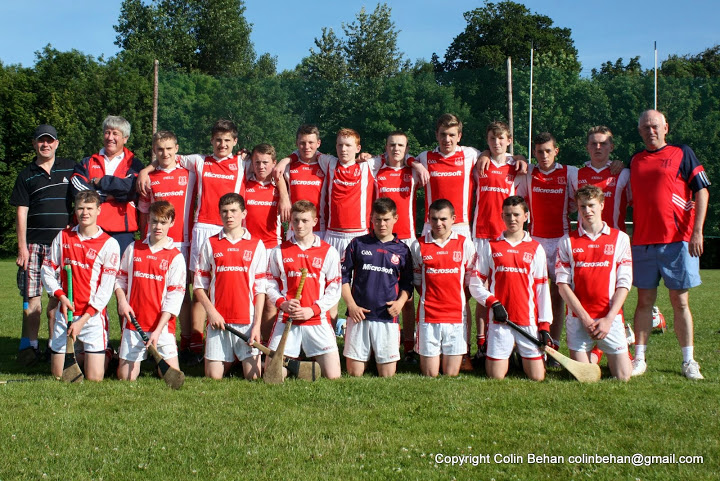 A devastating display of drive, determination and skill saw Cuala’s U16 ‘A’ hurlers overcome Whitehall Colmcille in this Division 1 League game in Shanganagh Park. Right from the off Cuala displayed a steely resolve and dominated proceedings. At the back Brian Coronella and James Murphy were imperious and didn’t put a foot wrong all day. Coronella steamed out of defence on numerous occasions to clear ball. Murphy’s ability to read the game allowed him to dominate at centre-back and to play intelligent ball into his forwards. Ryan Di Felice is emerging as a quality keeper, and his puck-outs were landing on the opposition ’65. Diarmit Maas showed how good a defender he is and won impossible ball at wing-back. He is back to his best. Dan Johnson and Mickey Power were colossal in the corners and Rory McMahon, despite an injury early on, swept up anything thrown at him down his wing. Power took a yellow on 13 minutes to prevent an overlap goal. Tiarnán   Lane is fast becoming one of the cleverest hurlers in the city. His ability to see a pass and ghost into good scoring positions puts him up there with Alan McCrabbe. His link-play and his skills in defending are awesome. His free-taking today was flawless. Jack Hartnett added strength and solidity to mid-field and hooked and blocked everything that moved. But it was in the forward line where the real damage was done. Within a minute of the start, Mikey Wylde hit a goal from the right to set the tone for the day. Whitehall responded with a point. But Cuala were dominating the dirty-ball and drawing frees. Lane punished everything with cool efficiency. Fionn O’Drisceoil was magnificent at centre-forward and drove at the heart of the Whitehall defence every chance he could. He would finish with a personal tally of 2-3 from play. But Whitehall were still in the game. A speculative long range drive from the Whitehall centre-back found its way through the back-room all the way to the net. The goal only served to drive on the Cuala team. Quinner hit a rasper just before half-time only to see the Whitehall keeper make a magnificent save. Di Felice converted the ’65. But Quinn wouldn’t be denied. Two minutes later he rattled the net following great team-work from Myers, Wylde and Mahony. The teams went in for the break on a score-line of 2-8 to 1-3.                The resumption saw no respite for the Whitehall team. Two minutes in Mickey Wylde’s kicked attempt at goal went left and wide of the posts. Fionn Myers’ effort was stopped by the keeper who was now manfully holding back the tide on his own. But it couldn’t last. O’Drisceoil was now in full flow. With a steady supply of ball from the back, he was now making hay up front. He won impossible ball, swept through the middle and burst through on goal. He took his first goal with a typical burst through the centre. His second on 10 minutes was a class effort involving 4 or 5 Cuala players. Quinn was buzzing around at full-forward and together with Joe Mahony and Fionn Myers in the corners was a constant nuisance for the Northsiders. The full forward line would have scored more but for the brilliance of the keeper. Mickey Wylde was winning his own personal duel with his marker but was winning all the possession out wide on the right. Stevie Mc was causing hardship down the left. Whitehall had to revert to frees and Lane was clinical. Di Felice hit two artillery shells from distance. Worse was to follow. With five to go and Cuala up 4-13 to 1-7, a Whitehall player lost his composure and saw a straight red. With an extra man and Whitehall’s resistance broken, Joe Mahony and Fionn Myers hit two more goals within a minute of each other. Final score was 6-15 to 1-8.                                                                                                                                                                     When in possession, Cuala play a very efficient brand of quick, fast, intelligent hurling, but it’s when they are hunting down the opposition that they are at their best. They hook, block and hassle their opponents all over the field. They win a lot of turnover ball and fight and win most of the dirty-ball on the ground. Their work-rate and attitude is outstanding and the opposition player in possession is always put under severe pressure. It is an intoxicating brand of hurling that will prove very effective in the months and years to come!

Footnote: Cuala lie 5th in Division 1, a single point behind Crokes with three games to play.